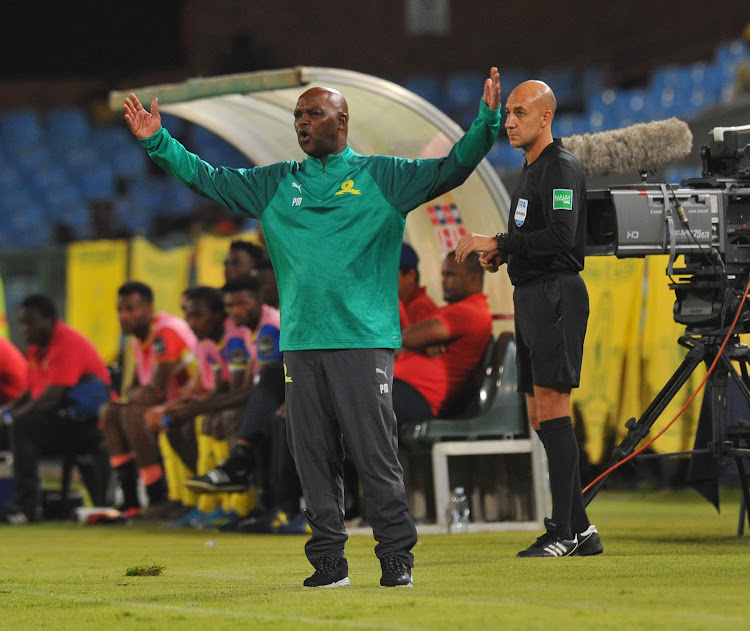 Petro de Luanda were almost disappointing opposition to a combination of the class of Mamelodi Sundowns in a 3-0 victory to the 2016 Caf Champions League winners at Loftus Versfeld on Saturday night.

Petro were outclassed by a clinical‚ if unspectacular‚ Downs to the extent that Brazilians coach Pitso Mosimane has identified the return trip to Angola in January as‚ while certainly far from easy in no doubt hostile conditions‚ potentially a source of a quarterfinal-clinching victory.

Downs‚ after one game‚ top the 2019-20 Champions League’s Group C after its other heavyweights‚ USM Alger and Wydad Casablanca‚ played to a 1-1 draw in a North African derby in Algeria.

“To be honest the resistance [from Petro] wasn’t that big‚” Mosimane said after a professional outing from his team at Loftus‚ but one where he felt Sundowns could have scored two more goals had they been more convincing.

“OK‚ the attack is good. You can see that they can do something in Angola.

"But we found our passing lines easier‚ we could find our guys in the middle [Rivaldo Coetzee and Andile Jali] who could control the game.

“The resistance was not strong. But don’t be deceived by this. Because in Angola it will be a different story.

“I’m a little bit unhappy with my team in the final third. I think when they realised that we could free-play‚ free-flow‚ we were stuck on the idea of the free-flow‚ rather than being shrewd and really taking the game as early as possible with a good lead.

“With the resistance that we had‚ I think we could have scored two more goals‚ to be honest.”

They are the kind of team who reserve their best for a certain class of opposition.

But they went about their task with a high level of professionalism‚ displaying‚ without breaking much of a sweat‚ the class of a team that each year enters the Champions League with the look of a combination being a threat to the top four‚ and potential finalists.

Mosimane believes Downs can have a chance of a win in Angola.

“I saw their derby against [fellow Luanda giants] Primeira de Agosta. It was competitive. This team is big there.

"When you go there it’s guaranteed you are going to have 60‚000 easily‚” Downs’ coach said.

“[But] When I look at the programme I think everybody will feed off this team. So the biggest one would be for us to win away against this team.

“If you win away against this team you’ve done yourself a big job.”

Long before travelling to Angola in late January‚ though‚ Sundowns are immediately into more serious Champions League action with their trip to Morocco to meet recent nemesis and 2017 winners Wydad on Saturday.

Black Leopards coach Luc Eymael has called for more discipline from his players as they prepare to host Lamontville Golden Arrows in their Absa ...
Sport
2 years ago