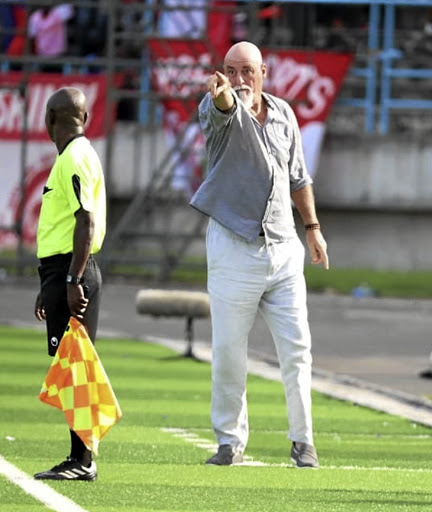 The axing of Patrick Aussems at Tanzanian giants Simba has paved the way for him to be appointed the new coach at Polokwane City.

The Belgian has been strongly linked with the job at Rise and Shine since former coach Zlatko Krmpotic was fired three weeks ago.

The 54-year-old had a fallout with Simba after he allegedly travelled to SA to have a meeting with Polokwane boss Johnny Mogaladi a fortnight ago. The coach had reportedly informed his employers he had to take leave to deal with a personal matter but was found to have met with Mogaladi.

This led Simba to suspend and instigate disciplinary proceedings against him that led to his firing at the weekend.

"The board has reached a decision to terminate the services of Mr Patrick Aussems for failure to execute his duties with the satisfaction and standard agreed in the contract," the club said in a statement.

"Despite efforts from the board of directors to support Mr Aussems after the elimination from the CAF Champions League, the former coach continued to operate in isolation without regard for the club's ambitions and upward trajectory in terms of reforms, discipline and conduct."

Attempts to contact Mogaladi yesterday were unsuccessful. Mogaladi is a big fan of foreign coaches while Aussems has been keen to work in SA.

When Simba held their preseason in at the Royal Bafokeng Sports Palace in Rustenburg in July, Aussems admitted to Sowetan that he was interested in coaching in the PSL.

"I follow South African football and it's perhaps the best league on the continent. Football here is professional and any coach in Africa would want to work here," he said.

After a good start to their season, Polokwane are struggling for form and have lost their last eight games, the last a home defeat to Bloemfontein Celtic on Saturday.