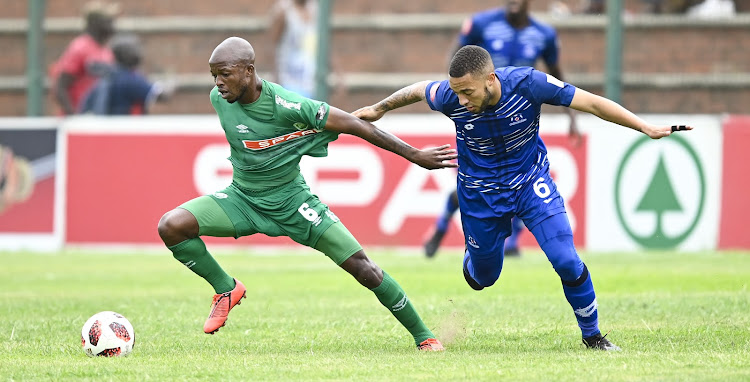 Butholezwe Ncube of AmaZulu FC and Miguel Timm of Maritzburg United compete for the ball during the match.
Image: Gerahrd Duraan/BackpagePix

Maritzburg United’s hopes of a morale-boosting away victory at AmaZulu on Sunday, a fortnight away from the Telkom Knockout final, failed to materialise as the KwaZulu-Natal derby in Durban ended goalless.

But Maritzburg did extend to seven matches their unbeaten run against Usuthu, who stayed second from bottom on the Absa Premiership standings.

The match was never going to be a riveting affair given the appalling state of the pitch at the King Zwelithini Stadium.

The surface was a patchy, uneven and, frankly, far too poor for a top flight match and left the teams both battling to get any fluidity into their play.

But the referee did hand a yellow card for Kwanda Mngonyama with just one minute, and nine seconds, of the match elapsed for pushing and shoving before the game’s first corner.

AmaZulu had the better of the first half exchanges but the pitch counted against Bonginkosi Ntuli when Jabulani Ncobeni’s cross bisected the two Maritzburg central defenders.

Ntuli should have finished but the bounce of the ball did not allow him to connect properly.

There was an even better chance for Ovidy Karuru when Maritzburg skipper Richard Ofori botched his clearance but panicked with just the goalkeeper to beat and duffed the opportunity.

With 12 minutes left to play, Maritzburg had their best chance when substitute Deolin Mekoa had a chance but fed Mxolisi Kunene instead and again the poor pitch made it hard for him to get a decent attempt away.

Thabiso Kutumela was denied a good chance five minutes from time as AmaZulu goalkeeper Neil Boshoff made a sharp save with his fete to a ball played towards his near post.

Maritzburg did gain one place on the log table and will be the happier of the two with the draw but it was a game that hardly inspired. They next play Polokwane City away before they meet Sundowns in the cup final on December 14.

Cape Town City and Highlands Park produced an easily forgettable goalless draw at the Cape Town Stadium on Saturday night, both missing out on a ...
Sport
1 year ago

Mamelodi Sundowns’ form is gaining steam‚ and they are beginning to utilise their full squad to contend with a hectic schedule‚ Brazilians coach ...
Sport
1 year ago

Black Leopards coach Luc Eymael has called for more discipline from his players as they prepare to host Lamontville Golden Arrows in their Absa ...
Sport
1 year ago
Next Article