Luc who has made a return to the PSL 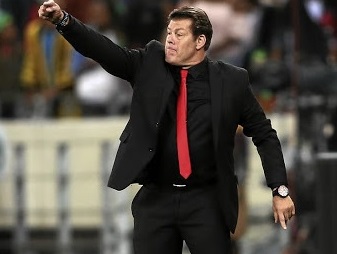 Belgian coach Luc Eymael is back in the country and has joined Limpopo side Black Leopards.

This despite the fact that Golden Arrows coach Steve Komphela had appealed to South African clubs not to hire the controversial former Polokwane City and Free State Stars mentor.

"I'm not being disrespectful, but Luc must not come to SA," Komphela said two weeks ago.

"This guy has disrespected people tremendously and this nation would be naive, if not very close to stupid, if they were to allow such a man to come and work here. Why give the man the respect and resources that belong to our country when he thinks so little of us?"

Black Leopards appointed controversial Belgian Luc Eymael as their new coach on a two-year contract on Thursday.
Sport
2 years ago

Leopards handed Eymael a two-year deal in the hope that he can change their fortunes.

They parted ways with Frenchman Lionel Soccoia after their struggles early in the season left them in 12th spot in the Absa Premiership.

"We must play a good brand of football. but we need to win games," Eymael commented during his press conference.

He added that he would prefer to close the chapter on his war of words with Komphela.

It started years ago when Eymael was seemingly campaigning for Komphela's Kaizer Chiefs job at the time.

Komphela offered a conciliatory tone yesterday. "I got nothing against Leopards, I've shown a million times that I hold no grudges. But be guaranteed one thing, don't disrespect me or people and still go around as if nothing has happened. I hope the people in Venda are respected, not insulted. If it happens I'll respond on [their] behalf," he tweeted.

Eymael said to be in the running
Sport
2 years ago