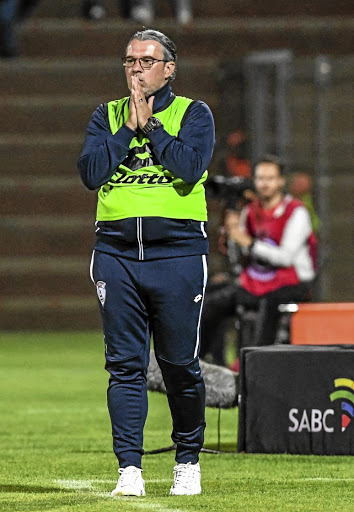 It's a fall from grace for the club after winning the Nedbank Cup last season and finishing sixth in the league under Belgian Luc Eymael.

Kavazovic thinks he failed to take the pressure off his team.

"We lived five months under pressure and that caused some huge mistakes and missed chances," he said.

The arrival of the Serbian, 43, earlier in the year brought great hope to the supporters after having won the league in Botswana with Township Rollers.

Yet Stars failed to avoid the chop after a horrendous run; they were winless in their last six league games.

"We must accept things with dignity. We had Chippa, Baroka and Leopards at home, all teams that are not on our level, but we didn't show that on the field. We won only two of a possible nine points."

He said he's willing to remain with the team if the club's management allows him.

Maritzburg United have a second big chance to beat relegation after drawing 1-1 against Baroka FC in the last round of dramatic Absa Premiership ...
Sport
2 years ago

Paulus Masehe will bring the curtain down on 18 seasons in the Premier Soccer League on Saturday but has one last mission — to save Free State Stars ...
Sport
2 years ago

Mamelodi Sundowns have been crowned Absa Premiership champions after a 1-0 win over Free State Stars at Goble Park in Bethlehem on Saturday afternoon.
Sport
2 years ago
Next Article