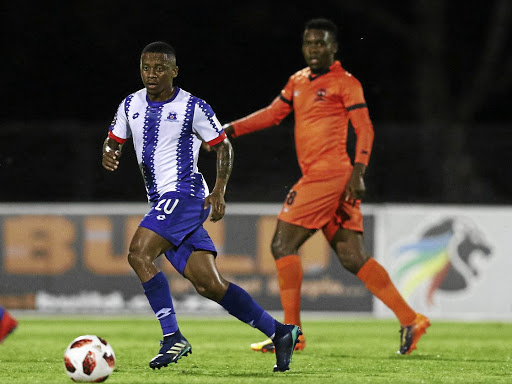 Maritzburg United's Thabiso Kutumela will have to rally his teammates to up their game to survive the chop. /Anesh Debiky/Gallo Images

In the previous campaign they were the surprise packages in the Absa Premiership but this season Maritzburg United and Free State Stars have been so awful that they are staring relegation in the face.

It's a common phenomenon that whenever minnows over-perform in one season they dramatically fall off a cliff in the next.

Factors such as lack of resources, depending on players who have passed their sell-by date and lack of fresh impetus contribute to the demise.

For Maritzburg and Stars, in 16th and 15th place respectively, their form has taken such a dip that they could be playing in the National First Division next season, a far cry from finishing fourth and sixth in the past campaign.

The relegation battle is shaping up to be one of the closest in recent memory with a few points separating teams from position 10 and below. ...
Sport
2 years ago

The Team of Choice captured the imagination last season with the youthful exuberance while Stars were one of the hardest running teams under Belgian Luc Eymael.

Things clicked under coach Fadlu Davids, who managed to squeeze the best out of Bevan Fransman, Siyanda Xulu, Lebohang Maboe and Siphesihle Ndlovu.

In the off-season, the departure of the highly influential Maboe and Fransman changed the dynamics of the team and they never got going thereafter.

Keletso Makgalwa, Yannick Zakri and Keagan Buchanan were roped in but their arrival had little impact as the team faltered along until Davids was fired.

Maritzburg United coach Eric Tinkler has called their Premiership match against their KwaZulu-Natal rivals AmaZulu a “must win” as the bottom-placed ...
Sport
2 years ago

Only recently under Eric Tinkler is the team showing signs of a revival, with the January signings of Thabiso Kutumela and Judas Moseamedi being the catalysts.

Ea Lla Koto's ageing squad that includes Paulus Masehe, 35, and Rooi Mahamutsa, 37, seem to have little left in the tank this season.

Roger de Sa, who experienced relegation with Bidvest Wits in 2005 and Platinum Stars last season, said it's not easy for smaller teams to play at a high level for two seasons in a row. "It takes a lot out of a squad to punch above their weight and have to do that for two season," said De Sa.

"I think under Eric, Maritzburg have a spark of life and will be confident they can climb out of relegation. I'm not sure about Stars. I don't know where their goals will come from and obviously, their coach [Nikola Kavazovic] is new to SA football."