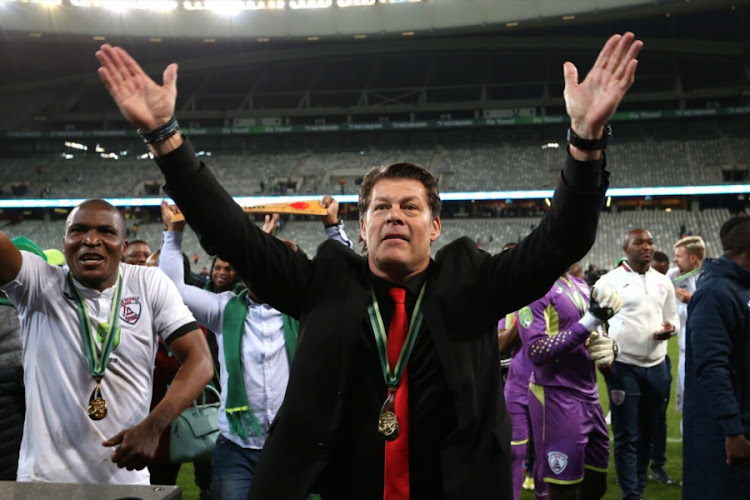 The Nedbank Cup Last 32 gets under way on Wednesday as South Africa’s top teams seek to avoid the embarrassment of an exit to lower league opposition in the hunt for what is the country’s version of the FA Cup.

Matches will be played over the next week with a number of David vs Goliath ties providing the potential for an upset.

TimesLIVE provides a quick match-by-match guide to the Last 32.

A potentially epic clash between two sides who are no strangers to cup fixtures having met in three knockout finals in a little over two years.

City have come out on top in two of those‚ including the MTN8 decider earlier this campaign‚ and will be favourites for this showdown in Cape Town‚ where they very rarely lose under coach Benni McCarthy.

They will also be able to unleash new signing Kermit Erasmus on their former side‚ and have won both league meetings already this season without conceding a goal.

SuperSport were Nedbank Cup winners in 2012‚ 2016 and 2017‚ beating Orlando Pirates in consecutive finals in the last two of those years.

Umvoti are coached by one of South Africa’s top up-and-coming tacticians in Kabelo Sibiya‚ who was previously with the Buya Msuthu side that played in the Nedbank Cup in 2017 but lost 2-0 in the first round to Bloemfontein Celtic.

TS Galaxy are in their first year of existence after owner and former player intermediary Tim Suzuki purchased the second-tier status of Cape Town All Stars at the end of the last campaign and moved the team to Kameelrivier in Mpumalanga.

The 2010 Nedbank Cup champions BidVest Wits will be heavy favourites to sweep aside third-tier Boyne Tigers from Limpopo.

Wits are riding high in the league this year under veteran coach Gavin Hunt‚ who also led the side to the Nedbank Cup final in 2014 where they lost to Pirates.

Tigers will be unknowns for many South African fans‚ but previously had Maritzburg United striker Thabiso Kutumela in their side‚ while club captain Thabo Mokgalushi has played for Jomo Cosmos and featured in the Nedbank Cup on a number of occasions.

Sundowns will not be relishing their trip to the Eastern Cape to face Chippa having come unstuck against Clinton Larsen’s side in the past.

Chippa knocked their illustrious opponents out of the League Cup last season and have always made visits tricky for The Brazilians.

Sundowns did claim a 1-0 league win in Mdantsane in October‚ with the goal scored by Gaston Sirino‚ which will give them confidence going into this match.

Another all-Premiership tussle between two form sides should make this a mouth-watering contest and comes two weeks after they played to a 0-0 draw in the league on January 12.

Usuthu claimed a 2-1 away win earlier in the season as ever-green striker Siyabonga Nomvethe and Argentine Emeliano Tade found the back of the net.

Highlands have confounded their critics this season and are having a solid campaign under coach Owen da Gama.

The introduction of Tjakastad Junior Shepard into the Nedbank Cup Last 32 had everybody reaching for their maps to locate the Mpumalanga ABC Motsepe League side that play in the Gert Sibande Municipality.

The third-tier team is co-coached by Sibusiso Zulu and Velaphi Zulu‚ and have been involved in playing local tournaments for many years‚ but decided to formally join the league in 2010‚ swiftly moving up through their LFA division to the SAB Regional League and into the ABC Motsepe League in 2014.

Golden Arrows have yet to lift the Nedbank Cup trophy but reached the semifinals in 2017 and will see this as an excellent opportunity to advance under new coach Steve Komphela.

These sides met when both teams campaign in the National First Division and Cosmos were victorious in all four games‚ conceding just a single goal.

It might be different this time round though as the fortunes of the sides have changed dramatically with Baroka having moved up to the top-tier.

MACCABI FC VS THE MAGIC FC

Western Cape ABC Motsepe League side The Magic travel to National First Division newcomers Maccabi FC for their Nedbank Cup Last 32 clash having made this stage of the competition for the second time since 2015.

On that occasion they were beaten 3-0 by top-flight Platinum Stars‚ but with former Kaizer Chiefs and Ajax Cape Town fullback David Kannemeyer now in charge‚ might be more confident of advancing.

Maccabi are playing in the Last 32 for the first time in their history having won promotion to the NFD at the start of the current campaign.

New Maritzburg United coach Muhsin Ertugral will have another tricky test when he takes his side to second-tier Witbank Spurs‚ who have ousted top-flight teams before.

Spurs beat Free State Stars in 2014 and have made the second round in three of their five previous Nedbank Cup appearances.

Maritzburg were beaten finalists last year‚ losing 1-0 to Free State Stars in the decider under then coach Fadlu Davids.

Ertugral has lost all four games in charge of the KwaZulu-Natal side‚ who have managed just a single goal in that time.

Defending champions Stars begin their 2019 campaign with a home clash against second-tier side Richards Bay.

Coach Luc Eymael‚ who led Stars to the title last season‚ has since departed and been replaced by Serbian Nikola Kavazovic‚ who has endured a tough start to his tenure‚ culminating in the 5-0 loss to Cape Town City last time out.

Richards Bay debuted in the Last 32 in 2018 and after a resounding 5-0 win over lower league Young Tigers‚ lost 3-1 to top-flight Bloemfontein Celtic in the second round.

Super Eagles take on Bloemfontein Celtic in a Free State provincial derby having been ousted at this stage in 2018 by eventual winners Free State Stars.

Eagles took Stars close and were within minutes of knocking their opponents out before the game went to extra-time and they eventually succumbed to the top-tier team.

Eagles have since dropped into the ABC Motsepe League but can restore their reputation with victory over a Celtic side under the temporary control of caretaker coaches Lehlohonolo Seema and John Maduka.

A Limpopo derby that is full of intrigue as the more fancied Polokwane City host their second-tier opponents.

TTM sacked coach Sello Chokoe on Sunday‚ robbing him of the chance to compete in the Nedbank Cup after he became a household name when he led another Limpopo club‚ third-tier Baroka FC‚ to the semifinals in 2011‚ beating Moroka Swallows and Kaizer Chiefs along the way.

City have been excellent this season under Slovakian coach Jozef Vukušič and are searching for a first ever major trophy.

A massive all-Premiership fixture will see Pirates travel to Limpopo for what will no doubt be a tough clash against Leopards.

Pirates were Nedbank Cup winners in 2011 and 2014‚ but are still smarting from final defeats in 2016 and 2017 having made four visits to the decider in the last eight years.

The Buccaneers have been utterly dominant in this tie in the past though‚ winning the last eight meetings‚ while Leopards’ only ever win in 25 previous clashes came all the way back in 2003.

The university do have a history of producing players for the top-flight though as Baroka defender Vusi Sibiya was signed from TUT‚ who also produced Black Leopards midfielder Themba Ndlovu and Highlands Park defender Elliot Seema.

The side is currently being coached by Stuart Mhlongo‚ who stepped up from his role as assistant after former head tactician Bushy Moloi was signed by Baroka FC.

Cape Umoya also have a new coach in former Chiefs defender Dominic Isaacs‚ who recently took over from Roger de Sa after he moved into an administrative role.

Second-tier Mbombela United host NC Pros from the Northern Cape‚ who ply their trade in the SAB Regional League.

Whenever teams from the Northern Cape enter the Last 32 they are reminded of the 24-0 hiding handed out to Powerlines FC by Mamelodi Sundowns in 2012‚ though to be fair clubs from the province have been much more competitive since.

Pros are owned and coached by Robert Sebastian‚ who is a well-regarded tactician in the Northern Cape having qualified three teams previously for the ABC Motsepe League national play-offs‚ including Kuruman Kicks.

Mbombela have met lower league opposition in both their previous Last 32 visits‚ beating Sibanye Golden Stars 4-0 in 2016 and Days FC 5-2 in 2017.

They went on to lose to top-flight teams in the second round on both occasions.

Eastern Cape ABC Motsepe League team Tornado FC will meet Soweto giants again in the Last 32 after being beaten 4-0 by Orlando Pirates in their last visit to this stage of the competition in 2015.

Chiefs are the opponents this time round and for all the players and coach Tshepo Motsoeneng‚ who returns after a brief stint at Chippa United‚ it will be a massive opportunity to make a statement about their potential.

Chiefs are Nedbank Cup winners in 2013 but have found it hard to find success in the competition of late despite a record 13 titles in the past.

They have also tasted defeat to lower league opposition before‚ including that historic 2-1 loss to third-tier Baroka FC in the 2011 quarterfinals.