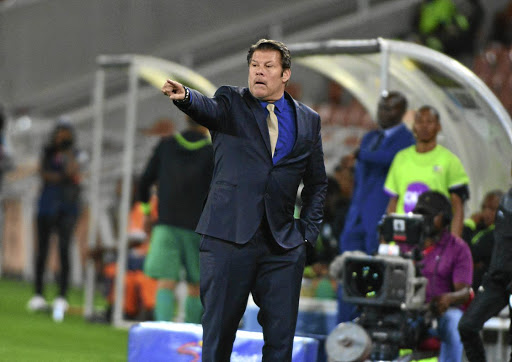 Vociferous former Free State Stars coach Luc Eymael has dismissed talks that he has met with AmaZulu manager Lunga Sokhela with an idea of joining Usuthu.

This after Sowetan learnt through a source close to AmaZulu that the club were looking to dump Cavin Johnson for Eymael, who's likely to leave his Egyptian side Tala'ea El Gaish SC.

"Sokhela was in Egypt a few weeks ago to meet Eymael. Apparently, they want to fire Johnson and bring Eymael. They trust that Eymael can at least win them one cup in the new season as he won the Nedbank Cup with Stars in 2018," said the source.

Though Eymael said he shares a healthy relationship with Sokhela and that returning to SA was the first thing on his bucket list, heinsisted he last spoke with the AmaZulu boss three months ago.

"I haven't spoken to Lunga in three months. I didn't see him here in Egypt. He was perhaps here on holiday. Lunga is friends with Rantsi Mokoena [Stars general manager], that's how I know him. I chatted with him to wish them luck when they were fighting relegation.

"It's true, I'd like to be back in SA. I'm in talks with one team but we have not found an agreement. I have refused to sign a new deal with my club here in Egypt."

Interestingly, the former Ea Lla Koto mentor knows that Johnson will soon be out of contract at AmaZulu.

"I think Cavin Johnson is still under contract until end of June. I don't know what will happen there[after]," the Belgium-born coach said.

Sokhela also refuted the claims that they want Eymael, insisting they are happy to retain Johnson, who saved them from relegation through finishing 11th on the log, despite being docked six points by Fifa for failing to pay Namibian footballer Phineas Nambandi.