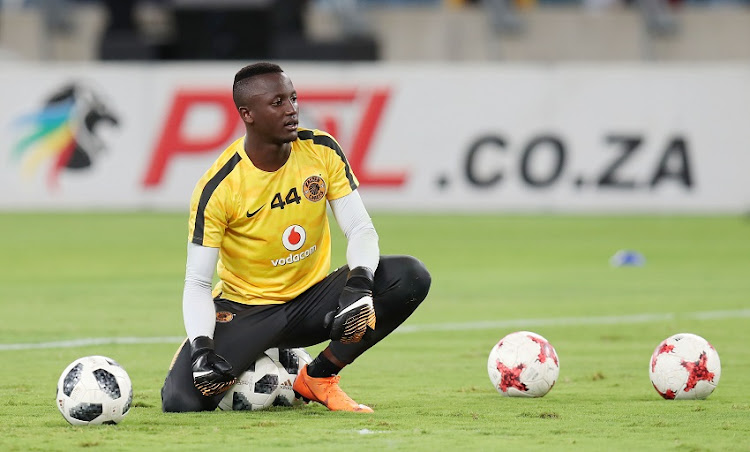 Increasingly confident Kaizer Chiefs goalkeeper Bruce Bvuma says the club will never have a goalkeeping crisis as long as he is available to play.

Chiefs struggled to fill regular No1 Itumeng Khune's imposing gloves after the goalkeeper's injury last years but Bvuma‚ who has seemingly strengthened his grip on the shirt in recent months as he grows in confidence‚ said he was ready to claim his prize.

Bvuma is set to start against Orlando Pirates in the pre-season Carling Black Label Cup at the FNB Stadium on Saturday.

“I believe now is time for me to show my authority here in the team.

"So I believe as I get this chance (against Pirates on Saturday)‚ and I believe that with God by my side‚ I will be able to perform and do well.”

Bvuma also dismissed suggestions that the club has struggled to adequately deal with Khune’s absence.

“You know in this game‚ the thing is being a goalkeeper‚ when you make a mistake it’s a big thing.

“In-field players‚ let me say a striker‚ can miss ten chances and score one. He will still be a hero.

“Unfortunately for us as goalkeeper‚ you can save ten chances and miss one and they will say you are not a good because of that one mistake.

“That’s something that you need to understand.

"For me I believe that we didn’t have any goalkeeper crisis last season.

"It’s just that one of our guys was going through that difficult time.

"As a goalkeeper we all go through that time.”

Bvuma's stock has risen considerably since travelling with Bafana Bafana to the Africa Cup of Nations in Egypt as third-choice goalkeeper behind rivals Darren Keet and Ronwen Williams.

“Firstly I’m grateful for the opportunity.

"Being there meant a lot to me and my family because I have been working hard and also I would like to thank my teammates for helping me‚” he said.

“I believe that everything that I have learnt there will help me going forward because I learnt a lot from that tournament even though I didn’t play.

“You’ll see on the pitch what I have learned.”

He said being part of the national team in Egypt boosted his confidence.

“It helped me to be amongst the best players‚" he said.

"To mention a few moments I had with Mo Salah (of Egypt and Liverpool)‚ to be on the same pitch with him made me realise it’s possible as long as you work hard.”

Bvuma said he fully understood his role in Bafana and the fact he was not expected to play as third-choice.