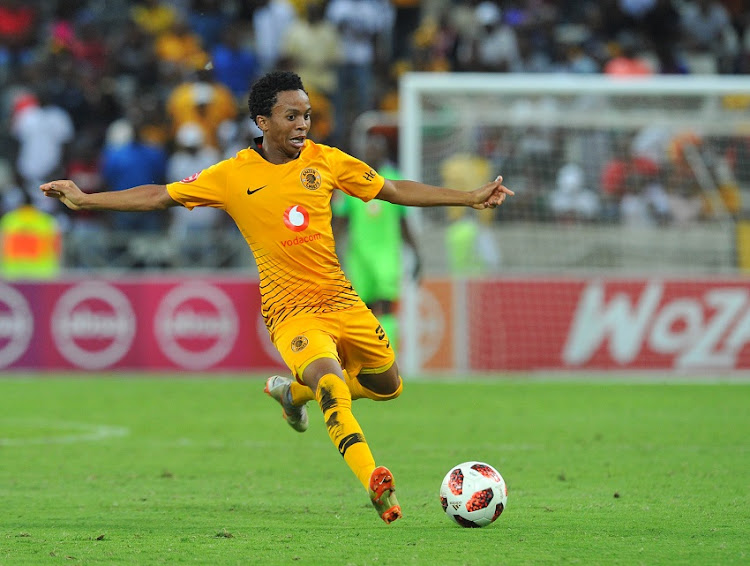 Nkosingiphile Ngcobo of Kaizer Chiefs during the Absa Premiership match between Supersport United and Kaizer Chiefs on the 15 March 2019 at Mbombela Stadium.
Image: Sydney Mahlangu/ BackpagePix

Ernst Middendorp believes that a combination of getting the best out of the players he has and forming a strong core of a first XI that melds in some of the new signings can be the formula that leads Kaizer Chiefs to success in 2019-20.

That‚ and a continued blending-in of young players – Njabulo Blom is the latest promoted‚ while Happy Mashiane and Nkosingiphile Ngcobo are back from injury – are the perfect storm Middendorp hopes can lead to an end to a four-season trophy drought.

The sceptics might have a hard time swallowing it.

Chiefs’ capture of the highly-rated forward Lazarous Kambole from Zesco United is impressive.

The other signings – Ghanaian midfielder James Kotei‚ SA-born Australian midfielder Kearyn Baccus and Serbian striker Samir Nurkovic – are an unknown quantity and have a lot of impressing‚ and adjusting to a huge club‚ to do.

It does not seem quite the avalanche of quality acquired that Chiefs appeared certain to need after their ninth-placed‚ trophyless hiatus last season.

Middendorp‚ asked what will be different for Amakhosi in 2019-20 from the past four seasons‚ said his first proper preseason is already change from arriving halfway through last campaign and inheriting the muddled approach of Giovanni Solinas.

He hopes injuries that disrupted the second half of last season can be managed better now. And he wants to form a core from those uninjured players to form his first team backbone.

Asked ahead of Saturday’s preseason Black Label Cup against Orlando Pirates if he is comfortable with his team‚ Middendorp‚ certainly managing to at least project an air of relaxed confidence‚ answered: “Ja‚ ja – very comfortable.”

On what can change for Chiefs this season‚ he said: “There are many factors‚ in terms of going on the front foot.

“Do you think as a coach I am happy seeing this horizontal passing‚ passing back‚ from the defence-line? No.

“But you come in [halfway] and then in a certain way you just run from match to match. We have to find a core – seven or eight players.

"We really tried to bring back other players like Eric Mathoho – and we have seen that he was really not prepared for it at that time.

“A very clear objective is to find a core of about eight players who we are not looking to change. They are the backline‚ the centre midfield‚ the forward players.

“And then add to it two or three players. That never was possible for us last season.

“I would have loved to have played with Khune from January to May‚ to have used Manyama and ‘Rama’ [Ramahlwe Mphahlele] 100 percent. But it wasn’t possible.”

Middendorp said he expects players who spent much of the second half of last season injured to have as much impact rejuvenating Chiefs as new signings.

“Let’s not just talk about the new players. We have players‚” the coach said.

“Start with Khune‚ injured in the beginning of January. There is no doubt Khune is the No 1‚ that he is so influential with the organisation‚ the leadership. He is needed – there is no doubt about it.

“We have Mathoho – I don’t have to explain his value if he is at 100 percent.

“This is for me‚ is the main priority. To get these players to a maximum level of performance where they can contribute.”