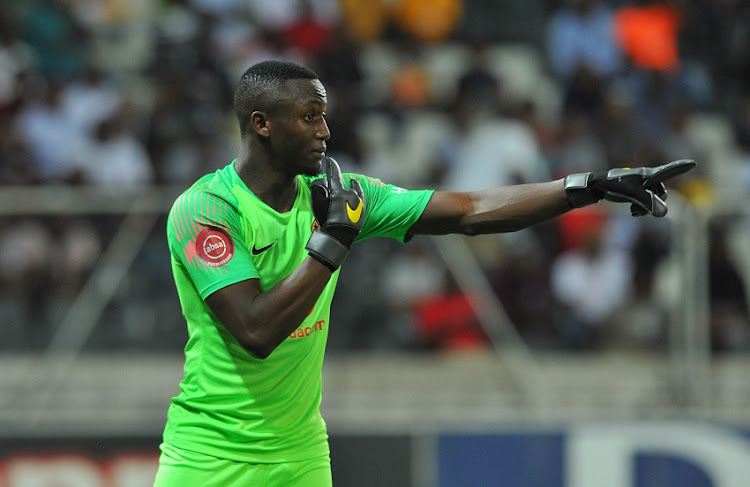 Bruce Bvuma of Kaizer Chiefs during the Absa Premiership match between Supersport United and Kaizer Chiefs on the 15 March 2019 at Mbombela Stadium.
Image: Sydney Mahlangu/ BackpagePix

Itumeleng Khune's looming shadow at Naturena does not bother Kaizer Chiefs goalkeeper Bruce Bvuma and the fast-rising star has set his sights on challenging the club's regular No1 in the coming season.

An injury has kept Khune on the sidelines for months but Bvuma has reason to be confident as his stock has risen considerably in his absence.

Besides staking his claim for the Chiefs No1 shirt‚ the increasingly confident 24-year-old even travelled with Bafana Bafana to the Africa Cup of Nations in Egypt as third-choice goalkeeper recently.

Bvuma is expected to line up against Orlando Pirates in Saturday's pre-season Carling Black Label Cup match at the FNB Stadium and he declared that he's ready to lay down an early marker.

“Well with everything that I got‚ including being in the Africa Cup of Nations‚ I believe I stand a good chance to compete with Khune‚” said Bvuma.

“I believe I stand a good chance to fight for the number one spot. So we’ll see what’s going to happen.

"I can’t wait for Khune to come back (from injury) so that we can start competing.

“I don’t want to only play because of his injury.

"I can’t wait for him to comeback so that we can compete proper.”

A determined Bvuma said he would no longer play second fiddle to his more illustrious rival.

The 24-year-old Bvuma was promoted from the Chiefs development structures in the 2017-18 season and he has played 10 league and four cup games in the PSL.

Most of these games came last season after Khune's injury.

The votes from the fans that select players to start Saturday's pre-season friendly game weighed heavily in favour of Khune until Chiefs disclosed a few days ago that he was not fit to start.

Bvuma said he was looking forward to play in his first Chiefs vs Pirates meeting on Saturday.

“I believe I was born ready it’s a great opportunity for me‚”he said.

“Playing in the derby‚ I know there are no friendly matches in this kind of a game.

"I can’t wait for Saturday. I just want to be there and show what I’m capable of doing.”