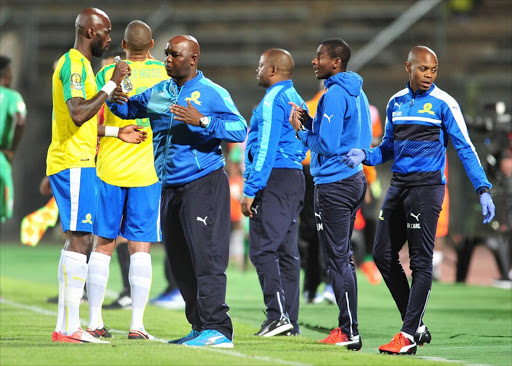 Mamelodi Sundowns coach Pitso Mosimane and his players in a discussion during the match.
Image: Samuel Shivambu/BackpagePix

Not that there was ever any doubt‚ but it has been confirmed that South Africa are among the 12 countries who have the right to enter two rather than one team in each of the two annual African club competitions.

SA are ranked sixth in the latest Confederation of African Football (Caf) ratings of the best performers at club level‚ which dictates who get the double berth‚ Africa's football governing body said this week.

The top 12 in the rankings‚ determined by the performances of clubs over the last five year of Caf competition‚ decides which countries can have extra representatives.

Points are weighted for each year’s performances.

SA have won points from the performance of SuperSport United in reaching last year’s Caf Confederation Cup final and Mamelodi Sundowns making it to the quarterfinals of the 2017 Caf Champions League.

Sundowns and Orlando Pirates go to the 2018-19 Champions League and Kaizer Chiefs and Nedbank Cup winners Free State Stars to the Confederation Cup.

The two competitions undergo a drastic change in the next month when they are no longer hosted from February through to November each year but from now onwards in tandem with the major leagues on the continent‚ from August to May.

The 2018-19 competitions are being squashed into a shorter period because of the switch-over.

Mozambique have won the right for the first time to have two teams‚ taking the place of Nigeria‚ in a major embarrassment to their league.

Free State Stars coach Luc Eymael believes home ground advantage could be a huge boost for his side against Bidvest Wits.
Sport
3 years ago