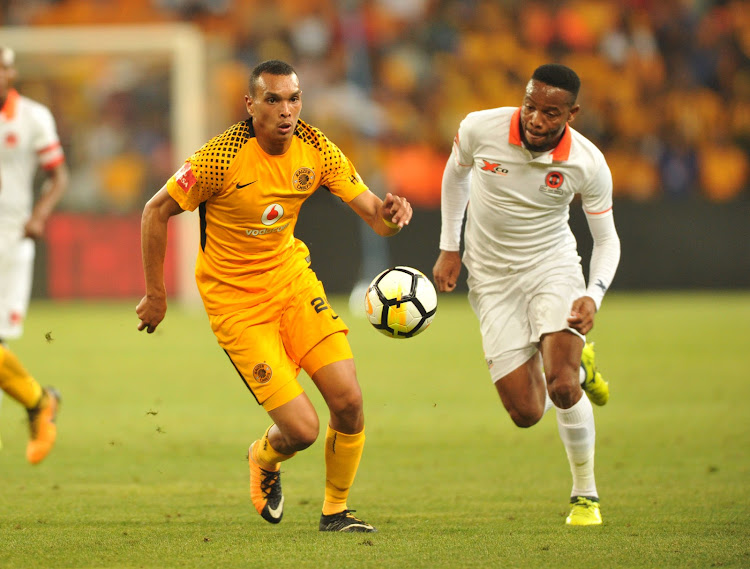 Ryan Moon of Kaizer Chiefs challenged by Thabiso Semenya. The striker, alongside Bernard Parker‚ Bongi Jayiya and Gustavo Paez have managed a paltry one goal in 27 appearances between them in all competitions.
Image: Aubrey Kgakatsi/BackpagePix

Domestic football returns this weekend with the first round of the Telkom Knockout as the second piece of silverware is up for grabs this season.

The seeding of the last-16 draw means the so-called big guns have been kept apart‚ but there are still some intriguing ties.

TimesLIVE looks at five talking points ahead of the opening round of games.

Who will provide the attacking threat for Chiefs and is Gustavo Paez forgiven?

Kaizer Chiefs have something of a growing injury crisis up-front for their last-16 clash at home to Black Leopards at FNB Stadium on Sunday‚ begging the question where the goals will come from for Amakhosi.

According to the club on Thursday‚ Colombian forward Leonardo Castro is still sidelined along with Madagascan playmaker Dax‚ while Lebo Manyama is out for six weeks with a fractured elbow.

Khama Billiat has also returned from international duty with a sore back and must be assessed. With the Soweto Derby against Orlando Pirates on October 27‚ will he be risked?

That would leave Bernard Parker‚ Ryan Moon‚ Bongi Jayiya and Gustavo Paez as the forward options‚ with the quartet managing a total of one goal in 27 appearances between them in all competitions.

Paez was forced to give an apology this week for appearing to ignore the handshake‚ twice‚ of coach Giovanni Solinas when he was substituted in the Macufe Cup against Bloemfontein Celtic and could still be in the bad books.

Can Justin Shonga replicate his national team form for Pirates?

Shonga has been a scoring machine for the Zambian national side in the last year or so with six goals in seven appearances‚ including three in his last three‚ but he has been unable to translate that form to domestic football in South Africa with Orlando Pirates.

Kaizer Chiefs coach Giovanni Solinas was initially confident that he had enough ammunition to sustain the club's scoring purple patch in the absence ...
Sport
3 years ago

Shonga grabbed another couple of goals in the back-to-back African Nations Cup qualifiers against Guinea-Bissau over the last week and looks sharp every time he pulls on a Chipolopolo jersey.

But just five goals in 33 appearances for Pirates since joining at the start of last season tells a different story‚ with two of those‚ including his only goal this season‚ coming from the penalty spot.

Pirates host improved Chippa United at Orlando Stadium on Saturday night and having only scored 14 goals in 11 games this campaign‚ are in desperate need of a forward who can take charge in the opposition box.

Shonga can be that man‚ but will he be?

Can the real Mamelodi Sundowns stand up?

Two wins in their last nine games in all competitions‚ and just six goals scored‚ confirm that these are difficult times for the most expensively-assembled squad in South African football history.

They welcome Bloemfontein Celtic to Pretoria at Lucas Moripe Stadium on Saturday‚ a team who held them to a goalless draw in the league just two weeks ago‚ and have now also lost the services of Sibusiso Vilakazi for what is likely to be the remainder of the season.

Coach Pitso Mosimane has trotted out the usual riders to potential Sundowns success in the Telkom Knockout‚ a tight fixture schedule being the chief among them‚ but there could be a time soon that club bosses look at the money that has been put in and what they are getting out on the pitch.

Celtic will be no easy ride‚ Steve Komphela has done an excellent job given the circumstances at the club‚ but dropping out of another cup competition at this stage will be a real blow for their star-studded side.

In truth‚ Sundowns haven’t really shown good form since April‚ a long six months for their side to endure.

Can Wits finally beat the bogey in Bethlehem?

It is quite an astonishing statistic – Free State Stars and Bidvest Wits will meet – this time at Goble Park – for the fourth year in a row in the Telkom Knockout last-16.

The previous three clashes have all been won by the home side‚ Stars claiming victories in 2015 and 2016‚ and Wits winning at home‚ albeit after extra time‚ on their way to lifting the trophy last year.

Wits have made a good start to the season‚ while Nedbank Cup winners Stars have picked up their iffy form and have looked improved in recent games.

Wits beat Stars 3-0 in their opening league game of the season in Johannesburg‚ but have not won in the Free State in their last seven visits going back five years.

It is a poor run for a Clever Boys side who have largely excelled under coach Gavin Hunt‚ bar their disastrous 2017-18 campaign where they flirted with relegation but still lifted the Telkom Knockout title.

It is another standout statistic that SuperSport United have only lost two of their last 25 domestic cup matches outright‚ with their other defeats coming in penalty shootouts after draws‚ most recently the MTN8 final against Cape Town City last month.

It is a run that dates back to March 2016 and takes in both the tenure of Stuart Baxter and now Kaitano Tembo‚ with remarkable consistency in cup competitions that other clubs simply cannot match.

Only Mamelodi Sundowns (3-1‚ MTN8 in August 2016) and Cape Town City (2-1‚ Telkom Knockout final in December 2016) have managed to get the better of SuperSport inside 90 minutes. So on the face of it their trip to Polokwane City at Old Peter Mokaba Stadium on Sunday looks routine.

But the Limpopo side have seen a huge upsurge in their fortunes under Serbian coach Jozef Vukusic and have won four and drawn two of their last six games‚ including wins over table-topping Wits and Chiefs‚ and a draw at home to SuperSport earlier this month.