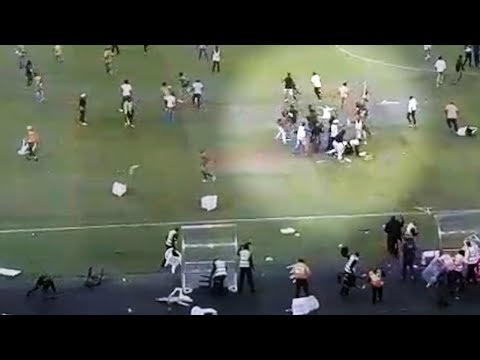 Kaizer Chiefs fans had rioted after a loss to Free State Stars at the Moses Mabhida Stadium in April.
Image: Sowetan

Premier Soccer League CEO Nande Becker said the appeal at the Safa appeals board for the PSL disciplinary committee sentence that Chiefs play two matches in KwaZulu-Natal behind closed doors was dismissed.

“The Safa appeals board dismissed the appeal by Kaizer Chiefs against their sanction for the Moses Mabhida chaos‚” Becker said.

“There is a further sanction of another match suspended for 24 months on condition that they are not found guilty of a similar offence.”

Chiefs' one match played already in front of an empty stadium saw them lose 1-0 against Polokwane City at Moses Mabhida on October 6.

Amakhosi‚ in third place in the Absa Premiership this season‚ will face Chippa United in their second closed-doors game at the same venue on November 10.

Chiefs received their sentence for a violent pitch invasion‚ where a security official was heavily beaten and property destroyed‚ following Amakhosi’s 2-0 Nedbank semi loss against Stars at Moses Mabhida on April 21.

The Moses Mabhida Stadium is still counting the costs of the damage emanating from a violent riot that broke out after Kaizer Chiefs lost to Free ...
Sport
3 years ago

That incident followed another two weeks previously where Chiefs fans hurled missiles at their players and dismantled security fencing in a 3-0 defeat by Amakhosi against Chippa United at FNB Stadium on April 7.

Becker was at pains to clear up confusion on why the suspended R200‚000 did not automatically become payable by Amakhosi after the Moses Mabhida pitch invasion.

“A hell of a lot has been made of the fact that there was the incident at FNB where Chiefs were given a suspended sentence of R200‚000‚” he said.

“That never came into play because the sentence at FNB was for Chiefs not providing adequate security.

“At Moses Mabhida‚ because it was a cup game the PSL were responsible for security. So the sentence was for the pitch invasion‚ which is a different offence.”

Chiefs are back in cup action this weekend‚ where they meet Black Leopards in a Telkom Knockout last-16 matchup at FNB on Sunday (kickoff 3.30pm).