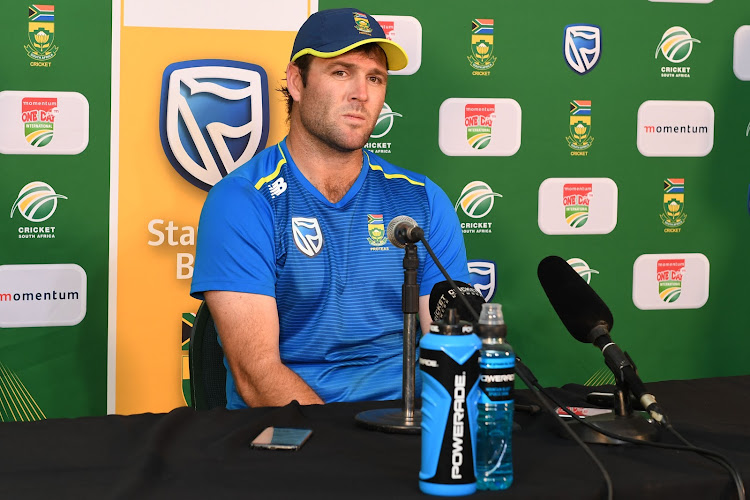 Jon-Jon Smuts is aiming to cement his place in the Proteas middle order leading up to the T20 World Cup in Australia this year.
Image: Lee Warren/Gallo Images

Jon-Jon Smuts is not thinking too far ahead to the T20 World Cup in Australia later in the year because of the fierce competition for places in the South African limited overs sides.

Smuts‚ who was named man-of-the-match for his 84 and two wickets in the six wickets win over Australia in Potchefstroom on Saturday‚ said he would continue to raise his hand whenever opportunities present themselves.

With Temba Bavuma doubtful for the first of three ODIs against India in Dharamshala on Thursday‚ the 31-year-old Warriors batting all-rounder may get another opportunity at the top of the Proteas batting line-up.

“At the moment I am kind of taking it series by series to be honest‚” he said after they wrapped up a series whitewash of Australia.

“We have India next who are one of the best sides in the world.

"Many people are saying they are the best side in the world and they are going to be extremely difficult to beat at their own conditions.

"It is going to be a tough test for all of us because we have only played at home throughout the summer.

“I suppose my career over the past five years has taken a bit different route. I started out as an opening batter and I moved to the middle order over the last few years.

"Mark Boucher and I had chats and we are probably looking at the middle of the order as a place for me in the national team.

“He did say to me that injuries happen in any series and I was fortunate to get an opportunity through an injury even though it was hard luck for Temba.

"I came in and batted at three‚ which is a position that I am used to‚ and I guess I haven’t done too badly.”

Smuts said he wanted to make a positive contribution to the team both on and off the field.

“It is great to be part of this competitive system‚" he said.

"Everyone is pulling their weight and you can see by the fact that there have been different man of the match awards and that is exciting to see.

"We are playing very well at the moment as a team and this 3-0 win over Australia proves that.

“Over the last couple of years domestically‚ I have really put my hand up with the ball but obviously I had to produce numbers with the bat.

"Boucher has said it all along that he can’t select fifteen guys but only eleven to go out there and play. He also has to balance the team and there are conditions to contend with also.”

In the midst of their disappointing‚ rain affected semifinal defeat against Australia‚ SA women’s captain Dane van Niekerk said getting the game ...
Sport
1 year ago

India through to T20 World Cup final after semis washout

India reached the Women’s Twenty20 World Cup final for the first time and sent England home when wet weather washed out the first of back-to-back ...
Sport
1 year ago

Australia dodged the Sydney rain to beat South Africa by five runs on Thursday and set up a Women’s Twenty20 World Cup final against an Indian who ...
Sport
1 year ago
Next Article