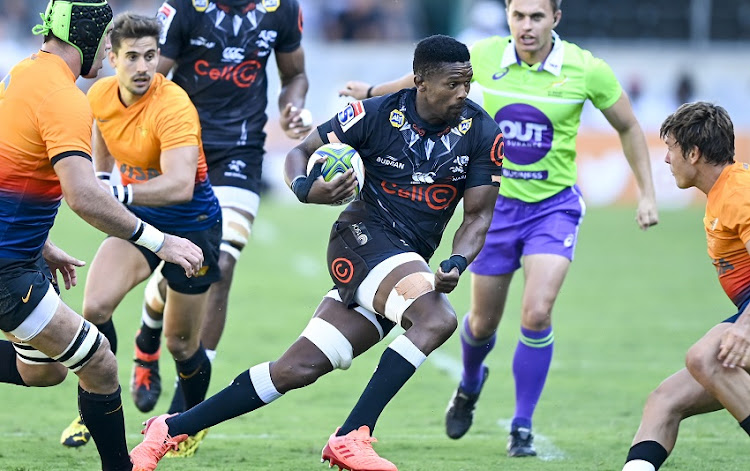 Sikumbuzo Notshe of the Sharks during the 2020 Super Rugby match between Sharks and Jaguares at the Jonsson Kings Park,Durban on the 07 March 2020.
Image: ©Gerhard Duraan/BackpagePix

With this significant 33-19 win against the Jaguares at Kings Park, the Sharks have firmly positioned themselves as the South African team to beat.

It was a critical victory considering it was their first game back from a successful overseas tour and they didn’t look a jet-lagged side.

They’ve now won five of their six games and three on the bounce since their week three loss to the Hurricanes to top the South African conference and combined log.

They’ll be hosting the rested Stormers this coming Saturday, but judging from how they handled the fiery and much improved Jaguares pack, they should be able to deal with the Stormers. South African derbies tend to throw up a different set of results.

This Sharks unit may not have the Stormers’ forward menace, but they have an incisiveness on attack that’s currently unmatched by the other SA teams.

This facet displayed itself in the fourth minute when a quick recycle saw lock Hyron Andrews canter over for their first try.

They should have had a second one three minutes later through Makazole Mapimpi, but an earlier knock on by Kerron van Vuuren cancelled it out. Sikhumbuzo Notshe then scored from a quick tap penalty in the ninth minute to give the Sharks a 12-0 lead.

The Jaguares aren’t a good side for nothing and while their rolling maul was nullified, their flyhalf Joaquin Diaz Bonilla has a bag of tricks. One of them was a 18th minute cross kick that led to Santiago Carreras’s try.

The Sharks responded nine minutes later with an Andre Esterhuizen try that stemmed from an Aphelele Fassi line-break that restored the Sharks dominance.

The Jaguares were able to pull back a try through Joaquin Tuculet in the 36th minute, but Curwin Bosch’s 22nd minute penalty ensured the lead was a healthy 22-12.

Bosch’s boot, which missed a difficult first conversion and a long range penalty that bounced off the crossbar, landed 43rd nd 48th minute penalties that stretched the lead to 28-12.

Van Vuuren then made up for his earlier unforced error when he crashed over from a rolling maul in the 52nd minute.

The game predictably lost its structure, but the Jaguares never gave in. They had a 73rd minute Sebastian Cancelliere try disallowed, but the replacement back scored three minutes later but the game had long gone.