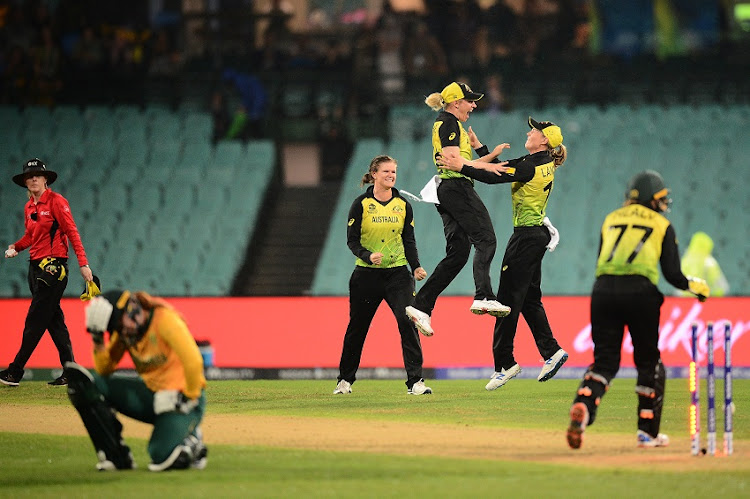 Australia dodged the Sydney rain to beat South Africa by five runs on Thursday and set up a Women’s Twenty20 World Cup final against an Indian who earlier progressed to the final for the first time without a ball being bowled.

Wet weather washed out the first of the back-to-back semi-finals at the Sydney Cricket Ground, leaving frustrated England to head home because they had finished second in Group B while India had topped Group A.

With no reserve day scheduled under tournament rules signed off by the boards of all competing nations, hosts and reigning champions Australia, who finished second in Group A, looked set to suffer the same fate as the rain continued to pelt down.

An evening lull in the downpour and the SCG’s extraordinarily efficient drainage allowed a window for to complete their innings, however, and captain Meg Lanning led the way with a battling 49 as they mustered a total of 134 for five.

The rain started to fall again during the final over and an extended break between innings left South Africa chasing a revised victory target of 98 runs from 13 overs under the Duckworth Lewis method.

Group B winners South Africa would have progressed had they been unable to complete 10 overs, but the rain mostly stayed away and Australia’s bowlers restricted them to 92 for five despite a blistering 41 from Laura Wolvaardt.

“It was very stressful, the waiting game during the day and at the ground,” said Lanning.

“The groundstaff did an amazing job and we were lucky enough to come out the winners.” After flirting with a PR disaster, the organisers now have the two teams in the final that will give them best chance of realising their target of a crowd of more than 90,000 at the Melbourne Cricket Ground on Sunday.

England captain Heather Knight earlier admitted that a loss to South Africa in their tournament opener had ultimately cost them a place in the final, with their semi-final against India abandoned in mid-afternoon.

“We’re just gutted we didn’t have the chance to fight for a place in that final. There’s not a lot we can do,” she told reporters.

“You’d hope now that there’s going to be a rule change going forward and no team will experience going out of a World Cup because of rain.” India skipper Harmanpreet Kaur, whose team stunned four-times champions Australia in the tournament opener, said she had been aware of the possibility that their position in the group would prove crucial.

“We knew from day one that we would have to win all our matches because something like this could happen, so that’s how we approached it,” she said.

“It was very unfortunate that we were unable to get a game today, but those are the rules for everyone.”