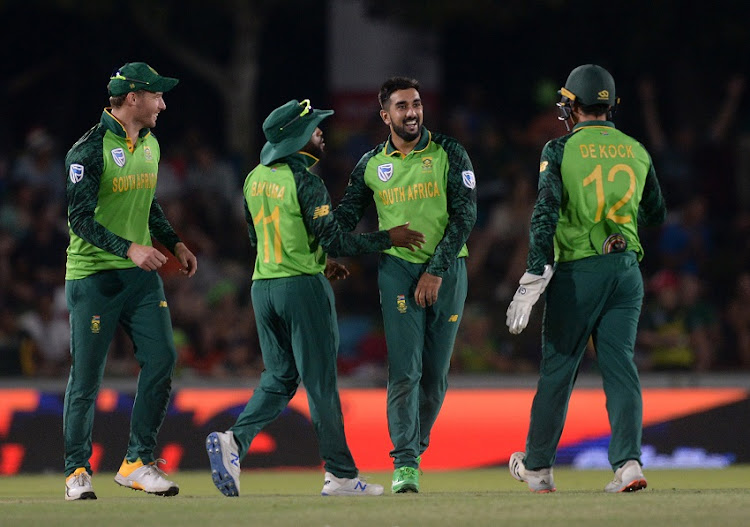 David Miller and Temba Bavuma of South Africa celebrate with Tabraiz Shamsi and Quinton de Kock who combine to to get the wicket of D'Arcy Short of Australia during the 2020 Momentum One Day International Series game between South Africa and Australia at Boland Park in Paarl on 29 February 2020.
Image: © Ryan Wilkisky/BackpagePix

That’s the position they find themselves in now as they salivate at the prospect of a series whitewash should they beat Australia in the third ODI in Potchefstroom on Saturday.

The respective 74-run and six-wicket wins in Paarl and Bloemfontein have given Quinton de Kock’s side an unassailable 2-0 lead.

That’s something that would have been far from their ledger considering how poorly they’ve fared for the better part of the summer.

The series win has emboldened captain Quinton de Kock to a point where nothing less than a win will do in the North West Province.

Considering how they were embarrassed by the same Australians in the T20 series‚ the turnaround has been nothing short of remarkable.

The fact they’ve got the series in the bag allows De Kock and his young charges to play without the crippling fear of a series decider. De Kock felt the marvellous situation they’re in could bring the best out of the team.

“We’ve come here knowing that we want to win the series 3-0 and it’ll be a good boost for the team‚” he said.

“We’ve worked so hard so for us that not to come up with another win would be very disappointing. We’re looking forward to making it 3-0 and that would be good for us.

“It gives the guys more freedom to express themselves while also opening up opportunities for the guys who didn’t have a chance to play in the first two games to see what they can do. They still have a responsibility to go out there and perform.”

De Kock’s run return hasn’t been the best in the series‚ but where his bat has gone missing‚ Heinrich Klaasen’s and Janneman Malan’s have led the way.

The two scored the match-defining tons in the respective ODI wins while David Miller is slowly showing the necessary senior player signs that have long been expected of a player of his experience.

De Kock’s shoulders have been the atlas that has carried the Proteas through the summer. His relief was palpable at the fact that in this short series‚ runs have been sourced elsewhere while Mitchell Starc has routinely bothered him.

Starc will miss Saturday’s ODI as he’s gone back to Australia to watch his wife Alyssa Healy‚ daughter of Australian wicket-keeping legend Ian‚ play in the T20 World Cup final against India in Melbourne on Sunday.

“It’s good to see the other boys getting runs and it’s important that something like that happens. You can’t just always rely on one person to score runs. The new guys are coming in and scoring runs‚ which is great because it takes off a lot of pressure off my back‚” De Kock said.

“I still feel like I’m batting well but obviously Mitchell Starc has given me one or two problems.”