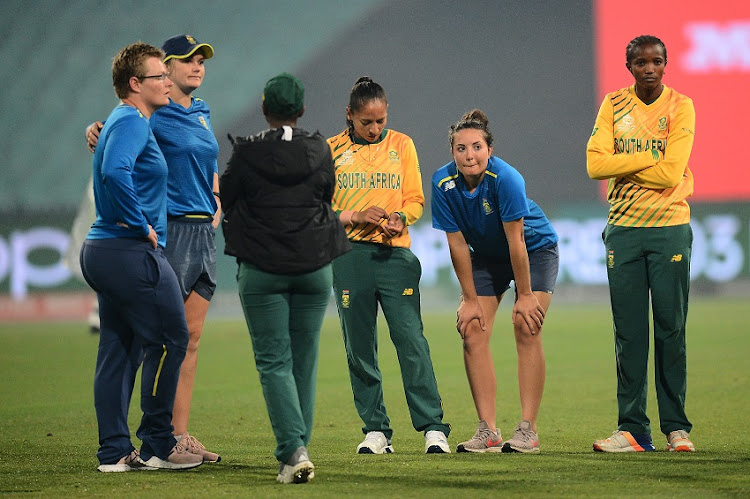 In the midst of their disappointing‚ rain affected semifinal defeat against Australia‚ SA women’s captain Dane van Niekerk said getting the game completed was their main objective.

The ICC T20 Women’s World Cup semifinals were held at the Sydney Cricket Ground but persistent rain washed out the first play-off between England and India.

With India topping their group‚ they qualified for the final.

The same would have happened to SA if the weather didn’t change. The rain dissipated long enough for a game to take place.

Rain during the break lopped seven overs from SA’s allotment‚ meaning they had to chase 98 from 13 overs according to the Duckworth/Lewis/Stern method.

“We came here to play cricket and we didn’t look at the radar or the weather.

"We felt like if we want to go to the final‚ you have to beat the best in the world. Everyone was up and about‚ ready to play the game. I can’t fault my team-mates‚” Van Niekerk said.

“Australia bowled really well and bowled to their plans.

"They did everything in their power to keep us on the park. We were here to play cricket. I’d rather lose than get a free pass into the World Cup final.”

The loss though hurt as South Africa played some wonderful cricket to get to the semifinals.

“It’s upsetting and the team is quite distraught at the moment.

"It’s now the second time the team has come really close in a semifinal and not get over the hurdle‚ so it’s really hurting and that hurts me‚” Van Niekerk said.

Van Niekerk admitted that Australia’s playoff street-smarts got them out of a tight corner.

SA bowled well to limit Australia to a chase of less than seven runs an over before the DLS method adjusted the target.

Van Niekerk also said she didn’t overthink the game even though it was SA’s first T20 semifinal in six years.

“They’re experienced in knockout games. We’ve only been in three and they’ve been in countless ones. Their plans were spot on though.

"When you look at how they started the tournament and where they are now‚ it shows the quality of the team. You can never write off the number one team in the world.

"At some stage‚ it was our game to win and theirs to lose‚ but they turned the tables. That came with experience and confidence.”