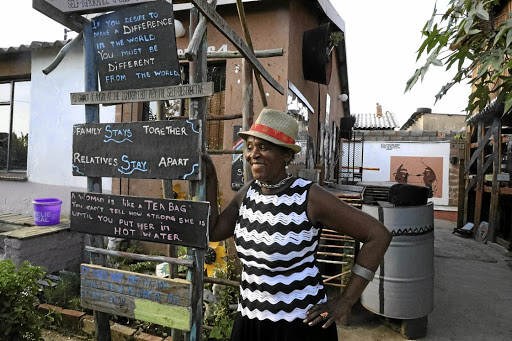 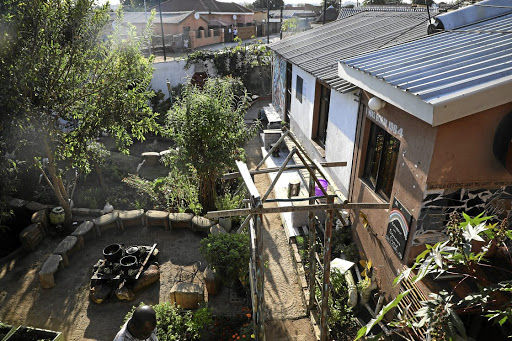 House number 2794 on Tunzi Street in Rockville, Soweto, is just a stone's throw from Regina Mundi Church, a majestic cathedral that became well-known as a haven for young political firebrands in the wake of the June 16 1976 student uprisings.

The police bullets on the wall behind its pulpit attest to its struggle credentials.

Mandy Mankazana, the owner of Soweto Inspirational Home Museum at the aforementioned address, believes that black people are still hurting as a result of this tragic past.

And stepping on her premises, it's evident that her property is not a typical museum, but a place of healing and tranquility for wounded souls.

Colourful paintings and indigenous plants greet visitors at the entrance. And as the name indicates, the first impression one gets is that it's an inspirational space for visitors with the sense of the adventurous people who are looking for something new from their tourism experience.

While conventional museums are storehouses for historical relics, this one is a living monument with a garden that's rich in native herbs and aboriginal trees.

These plants were part of the ancients' source of medicinal knowledge that was destroyed with the arrival of Europeans. The house is an inheritance from her parents.

Her father Chamberlain Themba Mankazana was an ex-teacher who captained rugby and cricket teams in the Eastern Cape in the 1940s and 1950s when the two sporting codes were still predominantly associated with whites.

"My father was a very inspirational person who always encouraged my brother and I to strive for the best," she recalls.

"He told us to see the world through our own eyes and think outside the box. This place is part of his legacy because it's for people who want to see life differently and not through lenses of the colonial and apartheid experience."

He died in 1978 when she was only 17, but Mandy says she honours him every day through her work for the betterment of others.

If any of my children were to ask me to recommend a list of books about our liberation Struggle and some of its most influential figures, Gaongalelwe ...
Opinion
2 years ago

Young people seeking employment should look at other innovative ways of being absorbed into the work environment rather than relying on government ...
News
2 years ago

"My mother Stephina Komape loved flowers and African herbs. I have inherited my love for plants from her," she says.

The main house still has some of the antique furniture and portraits of her parents.

African proverbs and sayings by sages such as Credo Mutwa adorn the walls of the house.

Other facets of the museum include a conference space and art gallery that showcases artwork by local painters.

Visitors can also experience soil and water therapy the ancient African way as a way of de-stressing.

The museum is a perfect showcase of cultural tourism in the community.

And to meaningfully experience its spiritual power and healing effect, visitors are required to observe some traditional etiquette, especially leaving their footwear at the entrance.

"Walking barefoot on the premises helps guests to connect with nature and their natural self," she explains.

And in true township style, she hosts jazz sessions for senior citizens of the neighbourhood. Mankazana says her journey as a tour guide started when she decided to deal with her own hurt, anger and resentment by reaching out to people who were responsible for apartheid, with the hope for a healing dialogue.

She realised that despite the world-famous township's tragic past, it was a culturally vibrant neighbourhood second to none. So a decision to share its rich cultural heritage with the rest of the world through tourism started her on a path to emotional and spiritual healing.

"My role as a tour guide introduced me to a steady stream of white tourists who seemed genuinely interested in township life.

"During apartheid, most of them only heard about black areas from what the government told them. These tours opened their eyes to the truth and our conversations became confessional sessions.

"The fact that some of them apologised for the sins of apartheid contributed to my journey towards healing."

In 1994 when Mandy started showing white visitors around Soweto, tourism was still a rumour and most white locals were still apprehensive about venturing into the black world that had been stereotyped by white media as the heartland of criminality and other social vices.

But former 702 talk-show host John Robbie offered her a slot on his popular radio show to share her experiences with his predominantly white audiences as a tour guide from Soweto.

"John Robbie made a difference in this regard. He gave me a platform that created a meaningful dialogue with suburban folks who were interested in visiting Soweto."

And through her company, Imbizo Tours, she was able to deepen local tourism and reach out to overseas visitors.

More significantly, her company has impacted positively on a number of young Sowetans by creating jobs for them in the growing tourism sector.

It has also assisted in setting up and supporting township business establishments such as restaurants and bed-and-breakfast outlets.

One of a kind in the country, she says the Soweto Inspirational Home Museum is a product of the 25-year experience and expertise she has garnered in the tourism industry.

It was opened in November last year, but already it has attracted the attention of several media houses from abroad.