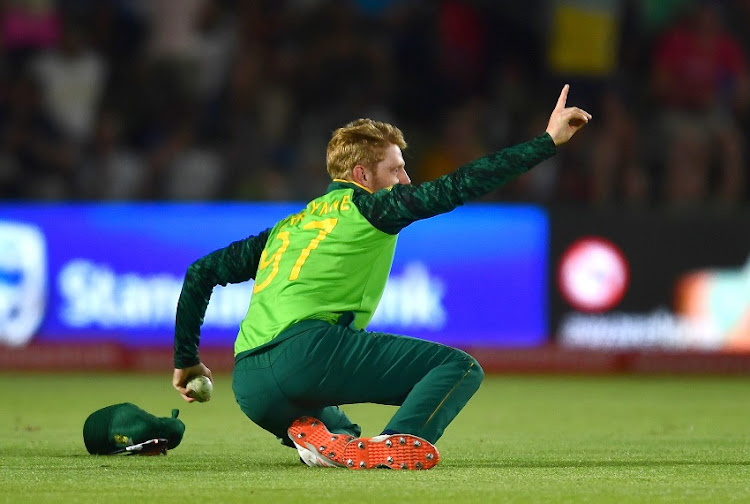 Kyle Verreynne of South Africa takes a catch in the deep to dismiss Pat Cummins of Australia during the 1st ODI match between South Africa and Australia at Eurolux Boland Park on February 29, 2020 in Paarl, South Africa.
Image: Ashley Vlotman/Gallo Images

Proteas newbie Kyle Verreynne hasn’t even finished a year with the national team but he already understands that resting on his laurels is a dangerous thing in international cricket.

SA have won the first match of a series three times this summer‚ but haven’t gone on to win the series.

Even when they lost the first game of a series‚ which was the case against Australia‚ they still went on to squander the rubber.

Wednesday’s second ODI against Australia in Bloemfontein represents a perfect opportunity for the South Africans to correct an ill that has dogged them all summer.

Verreynne‚ who played very well in the opening ODI win in Paarl on Saturday‚ knows that Australia will be a different beast at the Mangaung Oval.

“I was in the England squad when we won the first match‚ but didn’t go on to win the series. It’s something we’ve spoken about.

"It’s about keeping our feet on the ground and realising that it’s the first ODI and we haven’t achieved anything yet‚” Verreynne said.

“It’s the mindset we’re taking into the next two games to take away any complacency to make sure we get a victory and not banking on the fact we’ve won the first one.”

Verreynne has been a consistent performer for the Cape Cobras in all formats.

His form demanded that he be picked and after hovering around the various national team squads‚ he’s also going to be on the plane to India for the three-match ODI series later this month.

This is something that has got him excited.

“It’s exciting but it was nerve-wracking at the same time‚ knowing that the tour was coming up but also not knowing whether I was going to be part of the tour or not.

"Now that I know I’m going‚ it’s quite exciting and you always dream of playing against the big teams‚” Verreynne said.

“Australia as a debut was quite exciting and I’m also excited that I may get a chance to play against India‚ who are the best in the world.

"I’ve also heard the fans there are very passionate. It’ll be nice to get that experience.”

He was an important second fiddle to Heinrich Klaasen’s unbeaten 123‚ but when he partnered his fellow red-head at 48/3 in the 10th over‚ the 22-year-old was unflustered against Australia’s world class attack.

It was dream come true for him.

“It was nice to make my debut. It was a dream come true and it was a really special day.

"It was also nice to be on the winning side in my first game.

"I would have loved to get to 50 in my first game‚ but if you told me on the morning of the game that I was going to get 48‚ I probably would have taken it with both hands‚” Verreynne said.