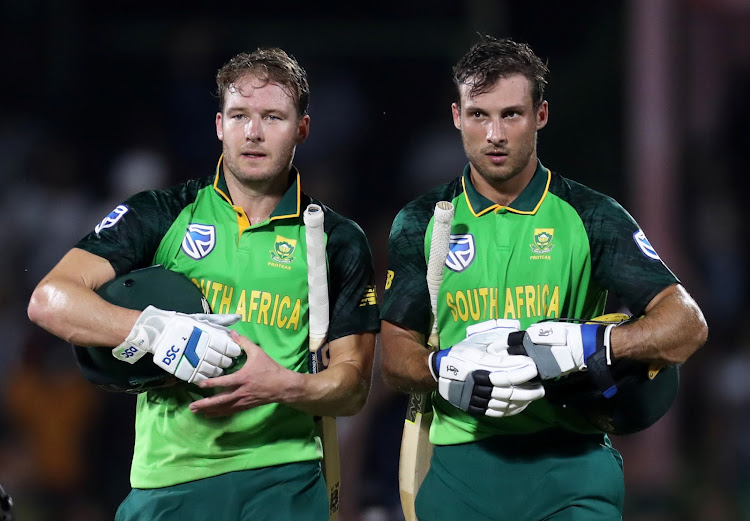 David Miller (L) and Janneman Malan, who scored his maiden century in just his second ODI match for the Proteas, carry their bats after scoring the winning runs to seal the series with a match to spare.
Image: ODI REUTERS/Siphiwe Sibeko

Career best bowling figures of 6/58 by Lungi Ngidi and a maiden century for Janneman Malan steered the Proteas to a six wickets victory over Australia in the second ODI at the Mangaung Oval in Bloemfontein on Wednesday night.

With this victory, South Africa have taken an unassailable 2-0 lead in this three match series which concludes in Potchefstroom on Saturday and momentum ahead of the trip to India for another three-match ODI series later this month.

The Proteas will depart for India on Sunday where they will play matches in Dharamsala (March 12)‚ Lucknow (March 15) and Kolkata (March 18).

Ngidi was supported by fellow quick Anrich Nortje who claimed two scalps of his own while Andile Phehlukwayo and Tabraiz Shamsi ended their hard shifts with one wicket each.

For his impressive efforts, Ngidi clocked 50 wickets in this format and he also becomes the fastest South African bowler to reach that milestone after 26 matches.

Malan ended on unbeaten on 129, a knock that included seven boundaries and four maximums. He was part of match winning partnerships of 91 with Jon-Jon Smuts, 81 with Heinrich Klaasen and 90 with David Miller.

Smuts, Klaasen and unbeaten Miller played a crucial role in this victory as they contributed scores of 41, 51 and 37 respectively as Mark Boucher's men successfully chased down the 271 target they were set by the tourists.

Captain Quinton de Kock (0) and Kyle Verreyne (3) disappointed with the bat but their poor performances did not come back to haunt the team as Malan and Miller helped the Proteas to cross the line in the 49th over.

Earlier in the day, Australia won the toss and elected to bat but they put up a par score of 271 on what looked like a flat wicket in their allotted 50 overs with the visiting team captain Aaron Finch and D’Arcy Short their top scorers on 69.

The other notable contributors for Australia with the bat were Mitchell Marsh (36) and Warner (35). With the the ball Adam Zampa returned with two wickets while Mitchell Starc and Cummins ended with one each.

This win comes in handy for the Proteas as they sealed their first ever series of the summer and they have put together the highest successful chase at this ground.

Proteas newbie Kyle Verreynne hasn’t even finished a year with the national team but he already understands that resting on his laurels is a ...
Sport
1 year ago

Temba Bavuma has been ruled out of the remainder of the ongoing ODI series against Australia to allow him to continue with his conditioning and ...
Sport
1 year ago
Next Article