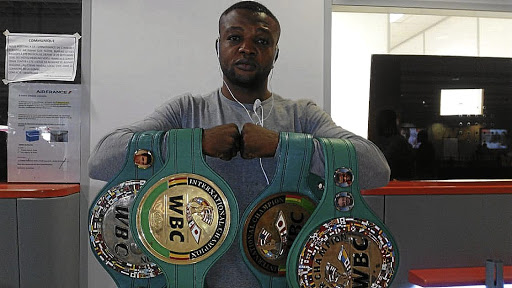 Ilunga Makabu shows off championship belts he has earned in his pro career.
Image: SUPPLIED

Boxing fans love a great comeback story. Muhammad Ali's return from exile in the 1970s made him the most loved sports figure. Still, successful comebacks are rare.

Even a minor diminishment in timing and other physical abilities can spell the difference between victory and defeat. When names of the old time greats like George Foreman (an inspiration due to his second comeback to win the heavyweight world title when he was well over 40 years after dethroning Michael Moorer) are mentioned, the name of Ilunga "Junior" Makabu should also feature on that list.

The left-hander from Kananga in Congo is trained here by Damien Durandt. Makabu's obituary was written after his third-round knockout loss to Englishman Tonny Bellew for the WBC cruiserweight belt at Goodison Park in the UK in 2016.

But the boxer has since bounced back in a rather spectacular fashion. It is not the seven-fight winning trot that makes Makabu tick. It is the position the WBC Silver champion is on right now that makes him qualify to be in that list. Makabu is waiting for the hierarchy of the WBC to tell him exactly who will oppose him for the vacant WBC belt and where and when will that fight take place.

Makabu in line for vacant WBC title
Sport
2 years ago

He is rated No 1 and could face No 3 contender - IBO holder Kevin "Two Guns" Lerena - because No 2 contender Krzysztof Glowacki from Poland is involved in a gruelling legal battle with WBO holder Maris Briedis. That could affect Glowacki's chances of facing Makabu.

A showdown between Makabu and Lerena - both left handers - will be a historic All African WBC title fight.

"If we get a chance to fight, why not give Africa such a big fight?" asked Makabu, who is now promoted by American Don King - who is rumoured to be looking at staging the Rumble in the Jungle 2 that will be headlined by Makabu at home.

King staged the original Rumble in Jungle world heavyweight title fight between Ali and Foreman at Stade du 20 Mai in Congo on October 30 1974. Ali dethroned Foreman as the WBC and WBA champion via an eighth round stoppage in front of estimated 60,000 fans.