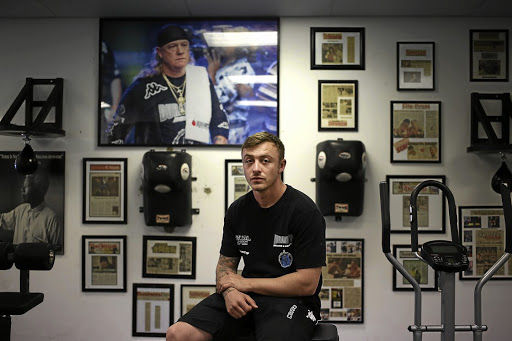 The corner of the gym, where there is a big picture of Nick, is a special place for Damien, where he feels connected to his father.
Image: Alon Skuy

Young boxing trainer Damien Durandt has kept his promise to continue where his father left off in producing champions.

When his father Nick "Mthakathi" Durandt, a successful boxing trainer, died on April 21, 2017 after his motorbike was involved in an accident with a car in the Free State, his first-born son vowed to continue his legacy.

Damien said he will be at the Orient Theatre in East London this afternoon where Jackson Chauke and Athenkosi Dumezweni will challenge for SA junior flyweight and WBC Silver junior bantamweight belts respectively.

Their fights will form part of Xaba Promotions and Events staged to mark the 25th anniversary of freedom and democracy in SA.

The trainer said Chauke will oppose Thabang Ramagole for the vacant SA title, while Dumezweni will face Jonas Sultan from the Philippines for the vacant WBC Silver junior bantamweight belt.

"It will be the continuation of building champions and also making sure that my father's legacy lives on."

Chauke pulverised Sihle Jelwane into submission in four rounds while Emmany Kalombo knocked out Nkululeko Mhlongo in the fifth round for the same organisation's junior middleweight belt.

Chauke will face Ramagole from Orlando in Soweto, an equally competent boxer, who is trained by his father Lucky Ramagole.

Said Durandt: "His father will not stop Jackson from winning the title. I'm extremely confident in Jackson because of how much this title means to him - 10 weeks of hard training and sparring. The question to be asked is, will Jackson in fact be 23 or 33 after Sunday?"

Regarding Dumezweni, Durandt said the boxer is out to show he is world-class.

"He will tear Sultan apart and secure his position as a top-level fighter," said Durandt.

"Victory brings with it a top-10 rating with the WBC. People will see how smart, strong and clever he is."

In other title fights, Nkosinathi Joyi will put his WBO Africa junior flyweight title on line against Ntlantla Tyirha while Yanga Sigqibo's WBO Intercontinental junior bantamweight strap will be up for grabs against Antonio Guzman from Venezuela.

Tomorrow, Durandt flies out to Kinshasa in the DR Congo, where his other charge Ilunga Makabu will face Cuban Mike Perez for the vacant WBC Silver cruiserweight belt on May 4.