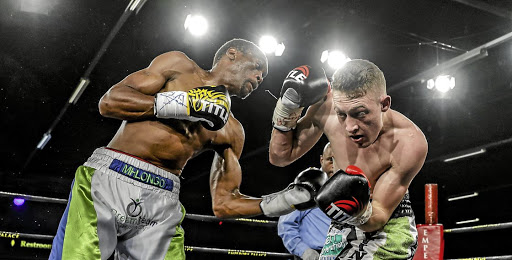 Nkululeko Mhlongo digs an uppercut at Brandon Thysse. Thysse's camp hopes his true reflection will be on display on May 10. / SUPPLIED.

Brandon Thysse will be the reason why Boyd Allen will not make it in boxing.

This stern warning was issued yesterday by Thysse's trainer Damien Durandt. Allen, a former mixed martial arts fighter, will put his WBA Pan African junior middleweight title on the line against Thysse in the "Power at the Palace" bill that will be organised by Golden Gloves at Emperors Palace on May 10.

Speaking from Romania where he is in camp with Ilunga "Junior" Makabu who will face Mike Perez for the WBC Gold cruiserweight title in Kinshasa, Congo, on May 4, Durandt said: "Boyd could not make it in mixed martial arts and Brandon will be the reason why Boyd won't make it in boxing."

Thysse, the son of former SA and Commonwealth super middleweight champion Andre Thysse, has just shared spoils with Linda Ntshingila in a 10-rounder for the Gauteng title, a fight that was declared a draw in Kagiso two weekends ago.

Thysse has more experience than Allen, having chalked up 10 wins against a loss to veteran SA champion Nkululeko "Bulldog" Mhlongo and a draw with Ntshingila.

Allen, who is trained by Vusi Mtolo, is undefeated after three fights. Said Durandt: "Brandon had an average performance against Ntshingila. I think it was lack of fitness because we took the fight late. A true reflection of Brandon will be on display on May 10.

Topping the upcoming bill will be Rowan Campbell in the first defence of his belt against Yanga Phethani.