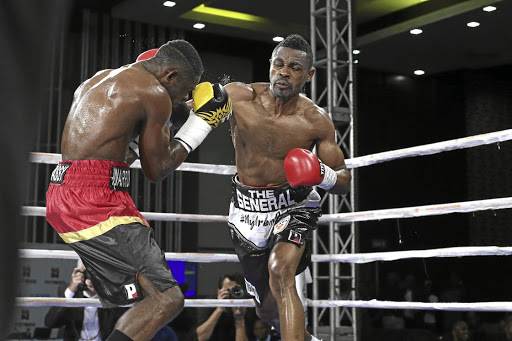 Emmany 'The General' Kalombo punishes Cristiano Ndombassy before putting him to sleep in the sixth round in East London on Saturday night. /Nick Lourens

When promoter Branco Milenkovic beat drums in 2009 for Ilunga "Junior" Makabu after he had joined forces with Milenkovic's Branco Sports Production, sceptics said Milenkovic was singing praises for Makabu simply because the Congolese was trained by the promoter's friend Nick "Mthakathi" Durandt.

Durandt has since passed on and his son Damien recently guided Makabu to winning the WBC Silver belt and is now rated No2 for the vacant actual WBC cruiserweight title.

Ten years after Milenkovic bragged about Makabu's qualities, Ayanda Matiti is making the same noise but for Emmany "The General" Kalombo. The 23-year-old smiling assassin was brought to South Africa by Makabu and, he too, joined Durandt before his son Damien took over.

The boxer made a stunning debut under Matiti's Xaba Promotions and Events establishment on Saturday night when he savagely knocked out Cape-based Angolan Cristiano Ndombassy in the sixth round at East London's ICC Hall. That was Kalombo's 12th KO in 12 wins.

"The sky is the limit for Kalombo," said Matiti, the man whose commitment to Gideon "Hardcore" Buthelezi has turned the IBO junior bantamweight holder into a revered world champion.

"Emmany will actually make me not regret signing him and investing in him. Kalombo is going places. I was very much impressed by what I saw of him."

Kalombo is doing exactly what Makabu did to local fighters until he met Tony Bellew who knocked him out in round three for the WBC belt in Liverpool, UK, in 2016.

But Makabu bounced back to register five consecutive stoppages before meeting Dmitry Kudryashov for the WBC Silver belt. Makabu won the tough fight by a fifth-round stoppage in Russia last month.

'M3' too fast for Jelwane - trainer

Young boxing trainer Damien Durandt has kept his vow to honour his famous father's memory and is on the verge of producing the first WBC champion ...
Sport
2 years ago
Next Article