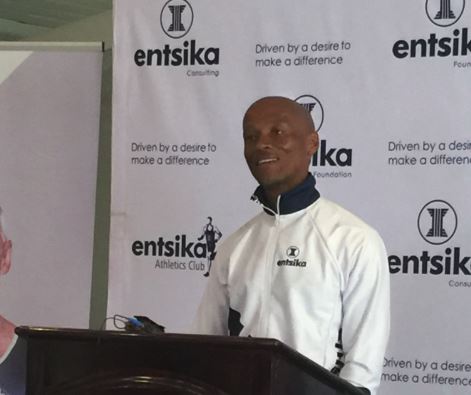 Team Entsika athlete Siya Mqambeli isn’t one of the more famous runners from the stable.

However‚ he is confident that the work he’s put in at the Buffs Marathon and the Legends Marathon in the past year will pay off for him in next month’s Comrades Marathon.

In both races he finished third and while they’re not as challenging as the up-run he’ll have to confront on June 9‚ the fact he did well in both races makes him feel he’s ready to rumble in two weeks’ time.

Mqambeli was in Dullstroom with his teammates where they were in week six of their eight-week preparation camp for the up-run‚ which will be run from Durban to Pietermaritzburg.

The 36-year-old from Mount Frere promised fireworks and a surprise for the Comrades Marathon.

“I’ll bring a few fireworks and I’ll surprise at the Comrades Marathon. I’m quite confident about that because in the marathons I took part in‚ I ran with the top guys‚” Mqambeli said.

“For example‚ in the Legends Marathon‚ all the top guys were there. I know the pace can be very tough but I’m also tough.

“Some of the guys I ran with were gold medallists so that gives me a lot of confidence. We’ve seen guys who have done well who have had to settle for second behind unheralded guys. David Gatebe is an example.”

With the Buffs (42.1km) and the Legends (68km) being over different distances and with different demands‚ Mqambeli feels the Eastern Cape-based races have given a different preparation edge.

Mike Fokoroni and Joseph Mphuthi‚ seasoned Comrades Marathon competitors‚ were ahead of him in the Legends Marathon.

In the Buffs marathon‚ Luthando Hejana and John April finished ahead of him.

“Those marathons prepared me mentally because I know now I can run with the big guys and keep up with them. If you’re always running marathons and sitting at the back‚ you’ll never know what’s going on at the front‚” Mqambeli said.

“That boosts your confidence and I think that’s why I’m so confident right now that this year it’s going to be my year.”

Mthembu’s not just a three-time winner‚ but also won the Two Oceans Marathon in Cape Town.

Whether that’ll have an impact on Mthembu in terms of his title defence remains to be seen.

Mqambeli‚ though‚ said Mthembu will have to work hard for a title defence.

“Bong’musa is a strong and intelligent runner who knows how to read a race very well. However‚ he’s a human being with two feet‚ just like anyone else.

“He doesn’t have a distinct physical advantage and he’s prepared himself for this race‚ just like anyone else would prepare for the race. We just need to see what’s going to happen in the race.

“You can’t take away the fact he’s a great runner and he’s won the Comrades Marathon three times. This year we’re going to give him a challenge.

“It’s going to be very different this year and he’s going to have to work very hard.”

*Khanyiso Tshwaku was in Dullstroom as a guest of Team Entsika

Mthembu is on the pound seat

Bong'musa Mthembu not only reaffirmed his status as the best ultra runner in the country but his feat also put him firmly on the pound seat.
Sport
3 years ago
Next Article