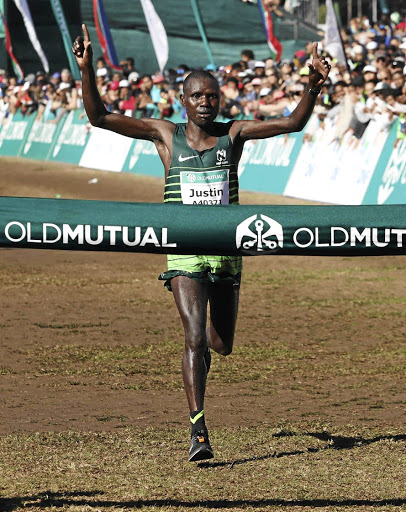 A quality field of top local and international elite athletes will take part in this year's Old Mutual Two Oceans Marathon in Cape Town, at the Easter Weekend on Saturday April 20.

Steyn is training with an end goal of Comrades in mind, and with the Easter weekend being that much later this year, it might be a tough task to pull off both wins.

Chesire's training has been going according to plan but he can expect some tough competition from a quality field of ultra runners who have all been training to win.

Runners in the Two Oceans Marathon who wear black armbands in support of the Save South Africa campaign will be disqualified and reserve the right to ...
Sport
4 years ago

His fellow countryman Abraham Kiprotich, who boasts the fastest marathon of the entire field (2:10 at the Istanbul Marathon late last year), will be running his first ultra marathon and it will be an interesting test to see how he fares over the last 14km with the Constantia Nek climb part of this last section.

Another popular Maxed Elite runner, Zimbabwean Prodigal Khumalo, is back running after a foot injury had him sidelined since December last year. Khumalo has chosen to run the 24km trail event.

Joining this strong field of male runners is local trail legend Ryan Sandes. He has switched from running the trail event for this year, to running his first 56km ultra event. Sandes is hoping to add the Old Mutual Two Oceans Ultra Marathon to his illustrious list of achievements.

A team of Kenyans and Ethiopians - some of whom are running the ultra distance for the first time - will always present a danger to the top contenders, but course knowledge and having the distance in the legs is a bonus which they may not have.

Runner-up last year, Lebenya Nkoka, also from Nedbank RC (3:10:32), has been fine-tuning his preparations for the big day.

Bong'musa Mthembu, triple Comrades winner, who placed fifth last year will also be in the mix.