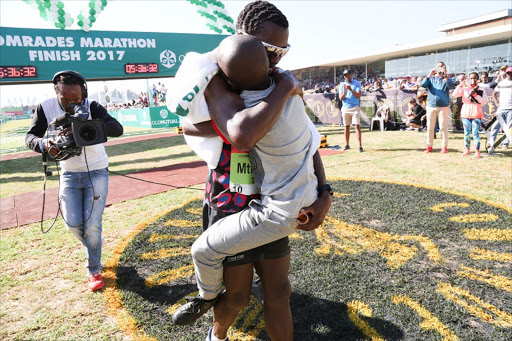 Bongmusa Mthembu made light work of the notorious Polly Shortts climb to win his second Comrades Marathon title in a time of 5:35:34.

While he wasn’t close to Leonid Shvetzov’s 2008 record up run time of 5:24:49‚ he became the first South African runner to win two titles since Bruce Fordyce in 1990.

Zimbabwean Hatiwande Nyamande was second in a time of 5:38:48 while defending up run champion Gift Kelehe was third with a time of 5:41:48.

The race took serious shape at the Umlaas Road mark when Mthembu and Kelehe‚ the 2014 down run and 2015 up-run winners‚ dispensed with the hardworking Charles Tijane from Maxed Elite.

Tijane was the perfect example of a solid pacemaker‚ especially with the fact he led at Cato Ridge even though the likes of Mthembu‚ Ludwick Mamabolo‚ David Gatebe and Kelehe started bearing down on him.

Those elite racers were content with others making the pace before they came into their own past the halfway mark.

Maxed Elite’s Thobani Cagwe was at the forefront of the race’s explosive start before fading badly near the halfway mark at Drummond.

It wasn’t the most intelligent piece of running as the unusually warm winter weather meant runners needed to pace themselves perfectly.

His mid — race meltdown allowed team mate Tijane to lead the race at the halfway mark with a time of 2:47:29.