'I know I'm powerful on the hills just like the DAF trucks,' says Hatiwande Nyamande 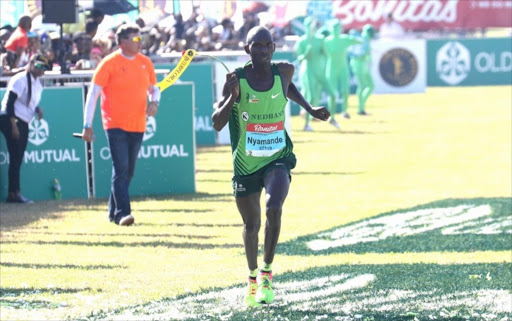 Zimbabwe's Hatiwande Nyamande has an affinity for trucks and that's perfectly understandable despite not being built like one.

He compares his engine to that of the DAF trucks that are common on South Africa's roads and the Beit Bridge.

With the excellence he displayed in the Comrades Marathon up-run‚ he has earned the nickname and in the future‚ he could put his engine into good use.

At some point‚ Nyamande may win the up-run but Bong'musa Mthembu got in his way this year.

Nyamande was third in 2015 and runner-up this year.

He said there's a good reason why people in Zimbabwe call him DAF.

“People in Zimbabwe call me DAF because they know when they talk about climbing hills‚ that's what I'm good at‚" Nyamande said.

"You know those trucks.

"They climb very well and that's how I climb.

"I know I'm powerful on the hills just like the DAF trucks and I climb those hills like the trucks.” he said.

Nyamande said he is working towards the goal of being the up-run boss but he's content with being in Mthembu's shade this year.

He also has some big shoes to fill as compatriot Stephen Muzhingi is slowly falling off the radar after his 2009-2011 treble.

He also understands how big Muzhingi is north of the Limpopo River in terms of popularity but at this point‚ the 38 year old from Harare has to let Mthembu bask in his deserved glory.

“I had thoughts about winning Sunday's race‚ but I find difficult to explain what happened.

"Mthembu was very good but at times I felt he was lucky.

"I made the mistake of letting him go and I just couldn't catch him‚” Nyamande said.

“Muzhingi was the one who inspired me to run the Comrades Marathon and he's done well in the race.

"When he won‚ he invited me to his party.

"I was inspired and I want to have a big party like Muzhingi when he won the race.

"We tried to encourage each other when we were racing but he didn't do well. Those things happen though.” - TMG Digital/TMG Sport