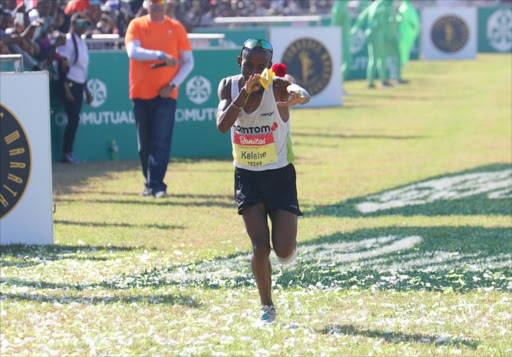 Gift Kelehe mounted one of the more gallant Comrades Marathon title defences but admitted that Bongmusa Mthembu was too smart for him.

With Mthembu's win in the 93rd edition of the Comrades Marathon on Sunday afternoon‚ the Police College physical training instructor had to settle for third place after Zimbabwean Hatiwande Nyamande also beat him to the Scottsville Race Course post.

It was one of those races where Kelehe tried but his best was not good enough.

“Bongs was mentally prepared and he was very strong‚" Kehele said.

"He didn't wait for anyone‚ even the guy (Nyamande)‚ who finished in second position.

"He tried to run away from Bongs.

"I looked at Nyamande‚ I looked at Bongs and I realised that Bongs is stronger than us and he just ran a smarter race.

"Nyamande tried to make a move but I couldn't catch him and Bongs.

"In the last 20km‚ I was having a bit of a problem with my hamstring.

"It was getting too tight and I had to keep on watering it.”

While Kelehe did well to run a time of 5:41:48‚ it was clear the race pace was dictated by the fast start provided by pacemakers Charles Tijane and Thobani Cagwe.

The latter bombed out at halfway but the former did well to keep the pace and finish in fifth place.

Mthembu's winning time of 5:35:34 was faster than Kelehe's 2015 time of 5:38:36‚ which gave credence to the former's claims that the new champion went into the race with a quietly determined mindset.

It also highlighted the difficulty of defending a title because the Comrades hasn't been defended since Stephen Muzhingi did the treble between 2009 and 2011.

The Zimbabwean finished in a disappointing 20th position‚ a sign of his waning powers.

Mthembu was 16th in the 2015 edition that Kelehe won while 2013 champion Claude Moshyiwa was seventh.

Kelehe said the need to prepare better for a title defence was a priority but felt the title was defendable.

“It's not that difficult to defend.

"You can do whatever that you feel that's necessary if God didn't give you that day‚ then it belongs to someone else‚” Kelehe said. - TMG Digital/TMG Sport