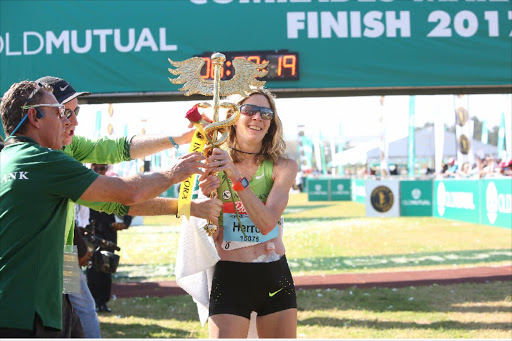 By adding to his 2014 down - run title‚ Mthembu became the first South African athlete to secure the up and down run double since Bruce Fordyce in 1987.

He also became the first black athlete to win both the up and the down run. The 35 - year - old Herron had an even better story to tell.

Her win was the first by an American athlete since Ann Trason's 1996/1997 up and down double.

Her time of 6:27:35 could have been better if she didn't stop to walk in the false knowledge of her thinking she'd won the race by just entering the Scottsville Race Course.

Even then‚ Russian Alexandra Morozova had too much ground to make up after her failed blast near Camperdown and had to settle for second in a time of 6:31:45.

Herron's muscular but awkward running style honed on the plains of Oklahoma was too much for the chasing pack.

She took the race by the scruff of the neck and laid waste to the climbs of Inchanga and Drummond‚ where the men's race took shape.

The class acts followed at Cato Ridge and Umlaas Road where Mthembu‚ Kelehe‚ Nyamande and the fourth placed Ludwick Mamabolo asked questions the early leaders could not respond to.

As per the nature of the race‚ Polly Shortts was the common denominator and Mthembu put down the hammer to leave the strong finishing Kelehe and Nyamande in his wake.

Cheered on by an adorning home crowd‚ Mthembu's finishing time was just over three minutes faster than Kelehe's 2015 winning time.

That signified the fast pace of the race even though the unseasonably warm conditions made things tough for the athletes.

However‚ Mthembu and Herron signified the race's slogan of giving it your all‚ even though they looked like they had plenty left in the tank. - TMG Digital/TMG Sport