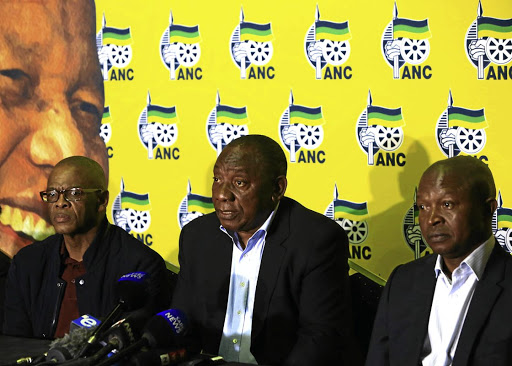 What will happen to the corrupt and incompetent black party - the ANC? And what will become of a pure white, racist DA?

The answer is simple: the ANC will lose power soon - no later than 10 years hence. We are probably witnessing the last government of the ANC in Gauteng in our lifetime.

Look at the ANC in Johannesburg, Tshwane, Cape Town or Nelson Mandela Bay, and you will see that the party has no chance of returning from the grave. The chaos in the party is shocking.

Those who think the ANC still has a long life must tell us who in the party has a semblance of credibility to make South Africans believe in another woolly new dawn after Cyril Ramaphosa.

If Dodgy David (DD) were to become the presidential candidate for the ANC, the party would probably receive 30% of the national vote. Is there a single South African out there who trusts DD?

The ANC being what it has become - a hotbed of factional battles - it is highly likely that, going into the party's 2022 national conference, there will be serious divisions around who becomes the next president.

The current deputy, DD, will obviously throw in his hat. And there will be a candidate for the KZN-Zuma faction. The gangster in Luthuli House, Ace Magashule, will be the chief mobiliser for the Zuma faction.

Ramaphosa already looks tired. He is likely to throw in the towel, painting himself with Mandela's one-term brush. By 2022, it will be clear to all that Ramaphosa's new dawn was a big hoax. Hundreds of thousands of South Africans will have lost their jobs, while Ramaphosa speaks his rehearsed English.

At that point, no sane person will watch Eskom's useless press conferences anymore, for load-shedding will be accepted as a "normal" feature of the ANC incompetence.

This, by the way, could very well bring us a new coalition government as early as 2024. Such is the fate awaiting SA's corrupt black party.

It must not be forgotten that in the pre-1994 Codesa negotiations, white people, through their National Party, demanded a Volkstaat (separate white republic).

The idea was for white people to have their own enclave where they could govern themselves, undisturbed by black people.

The white conservatives who masqueraded as liberal, the very strategists who engineered the formation of the DA, understood that a divided white population was a danger to the unity and survival of the white race in SA.

More importantly, the political unity of the white race, under one political party, was viewed as a step closer to achieving the goal of a Volkstaat. The politically vulnerable and the most beautiful part of SA, according to the Volkstaat calculus, has been the Western Cape.

The white conservative-liberals who are plotting to get rid of Mmusi Maimane are now confident that no one can take back their Volkstaat, the Western Cape.

They are not interested in other parts of SA - as long as they have their own enclave down in Cape Town. Hence the idea to collapse coalition governments outside the Volkstaat.

Those conservative-liberals are seriously irritated by black leaders in the DA who constantly remind them of the injustices of the past. They want their party back so that they can enjoy tranquil life in Cape Town.

The plan is for the DA never to lose the Western Cape, and never to run other parts of the country, and to remain an effective opposition party in parliament that can take a corrupt black government to court each time it threatens white interests.

Such, in a nutshell, is the future awaiting the white party - the DA. Back people will leave the party and see what to do with themselves. Only the worst of black stooges will remain.

The beneficiary of all this will be a more dangerous EFF, until a proper inclusive party for all South Africans emerges. Nobody knows when.