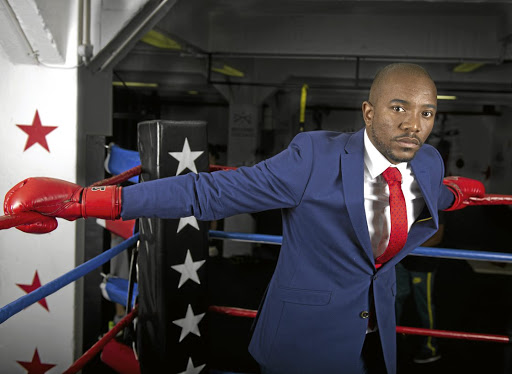 DA leader Mmusi Maimane is fighting for his survival as some in the party have blamed him for its poor showing in the general elections in May. /Gallo Images

In boxing terms, they would say DA leader Mmusi Maimane is on the ropes right now.

He could be knocked out this weekend if the party's federal council - the highest decision-making body between congresses - endorses a recommendation that he resigns and that an early congress be held.

In the event of that happening, would Maimane be able to get to his feet before the referee has counted up to 10? In this case a count up to 10 refers to him surviving until the scheduled date of the next congress - 2021.

It may not feel that way right now, especially given the body punches he has been taking from the Institute of Race Relations as well as a combination of a left-hook and an upper cut in the form of a Cape Town house and Toyota Fortuner scandals, but this is a fight Maimane needed.

Despite his obvious talent as an orator and his meteoric rise through DA ranks, there were always question marks about him being his own man. Perceptions, mostly unfounded, persisted that the likes of Zille, Leon and others called the shots in the DA even though Maimane is the officially elected leader.

Convincingly winning the ongoing fight would do him a lot of good, not just within the DA but with voters in general.

The Dobsonville-raised politician would probably go to the next round of the fight believing that the bout is beginning to turn in his favour as this past weekend, the party's federal executive - which for those who understand politics through the prism of the ANC is like the national executive committee - rejected the resignation recommendation and endorsed Maimane's leadership.

But that was to be expected, the federal executive is dominated by his supporters, especially provincial leaders.

This coming weekend would be tougher, however, as the number of delegates is bigger and they come from a wide range of constituencies.

The federal council has to decide on two fundamental issues whose outcomes would have a profound impact on the 39-year-old Maimane's career as a politician.

The first would be whether it agrees with Leon and the panel - ex-DA chief executive Ryan Coetzee and Capitec founder Michiel le Roux - that Maimane steps down and allow for an early congress to elect a new leader.

Maimane was one of the leaders who supported the appointment of the panel following the party's poor performance during the general elections in May. He wanted it to include independent political experts but the party opted for Leon, Coetzee and Le Roux.

Behind the panel's recommendation is the belief that the DA had lost its way under Maimane, that it performed poorly in opposition especially after President Cyril Ramaphosa replaced Jacob Zuma as ANC and government leader.

To win back the votes it lost to the Freedom Front Plus, the panel believes the DA needs a new leader. The panel is also critical of the close ties the Maimane-led DA forged with the EFF, arguing that this alienated some of the party's traditional white constituencies.

Secondly, the federal council would have to decide on James Selfe's replacement as its chair. If it chooses Zille, Maimane's hand would be severely weakened and it may signal the beginning of an end for his political career.

But if he succeeds in giving his detractors a bloody nose by having his ally Athol Trollip elected and the Leon recommendations rejected, it would really be difficult for his opponents outside of the DA to continue dismissing him as a well-spoken front-man for a party of white privilege. His hand would be strengthened going to the 2024 general elections.