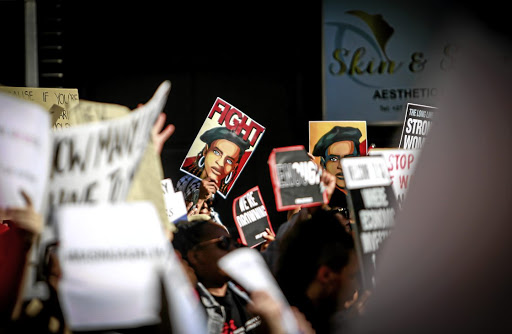 Protesters justifiably brought the scourge of violence against women to the JSE because Sandton is the heart of South Africa's economy and home of the influential corporate sector. /Sebabatso Mosamo

In recent weeks, we have seen women take to the streets of SA to bring to the fore the scourge of violence against women and children.

On September 13, women shut down streets of Sandton CBD, Africa's richest square mile, to present a memorandum to the Johannesburg Stock Exchange (JSE).

In the preceding week, protestors targeted the World Economic Forum (WEF) on Africa in Cape Town, to bring the scourge of violence against women in SA to the attention of business leaders and international delegates.

The targeting of these two institutions forced us to give a level of attention to corporate SA, a sector that often goes unnoticed and is hardly held accountable when coming to its role in the fight against gender-based violence (GBV).

I say often unnoticed because corporate South Africa for the longest time, has gotten away with their complacency when coming to the fight against the scourge of gender-based violence. We are quick to turn our attention to the government and its failures when coming to fighting violence against women and children - rightfully so. However corporate SA, as a big role player in our economy, often goes unchecked.

Mrwetyana family distance themselves from ‘cash in on Uyinene’ initiatives

The Mrwetyana family have distanced themselves from what they termed “unauthorised initiatives” to raise funds or “cash in” on the tragic loss of ...
News
2 years ago

Many thought the targeting of JSE and WEF on Africa, was ill-placed. The KPMG report on the economic impact of gender-based violence tells a story that clarifies why it is significant that these two institutions were targeted.

The report highlights why corporate SA and all other major economic role players, besides the government, should care about gender-based violence.

The study goes on to state that productive economic growth and the significant investments made by government and the private sector to grow SA's economy will be eroded as long as the prevalence of violence against women prevails. GBV is said to erode both the inputs and outputs of growth.

According to the KPMG report, GBV prevents the economy from attaining full economic potential. Here is why: Women suffering from domestic violence have significantly lower propensities to turn up for work on time, to work productively while at work and to stay in the job.

Employers must hire replacement staff to account for absenteeism and face additional search, hiring and retraining costs for replacing employees who are victims of violence. This study shines the light on the losses by business, leading to restrained economic growth lost, due to GBV.

The sound of the vuvuzela has taken on a new purpose, as a security instrument in Soweto.
News
2 years ago

This report represents the business case for why business should care. It is bewildering that I am even saying "business case" for efforts towards eradicating GBV; corporates should do this out of necessity. However, business cares about the numbers, so here it is: GBV does indeed impact your profit margins.

Businesses in our country keenly sponsor efforts around sports and other recreational activities, which is great.

I wonder if this lack of attention to GBV by corporate SA could be because the boardrooms are still disproportionately filled with men. Men being at the helm means that they dictate where the money is spent. Explicitly put, only 3.3% of listed companies on the JSE have women as chief executives, a big problem on its own within corporate SA.

The continued male domination of companies perpetuates and sustains patriarchy and toxic masculinity. Poorly resourced NGOs do their best offering victims of abuse safe places, legal help, skills and counselling, but unfortunately they are closing down due to lack of funding.

The KPMG did great to show why corporate SA should do more and why they stand to benefit if they did more. I hope their counterparts will follow suit.

Tentacles of patriarchy toxic to both men and women in Mzansi

This means an average of 114 rapes were recorded by the police each day, and these figures obviously do not even account for the gross ...
Opinion
2 years ago

Oupa Kubheka has become the first officer to walk away with the prestigious Johannesburg District Detective of the Year Award, beating hundreds of ...
News
2 years ago

Collaboration across different government departments is critical in the battle against gender-based violence (GBV).
Opinion
2 years ago
Next Article