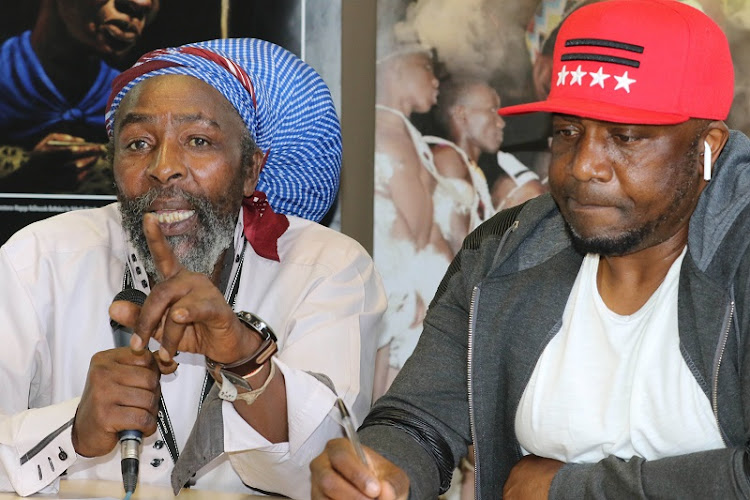 Sello 'Chicco' Twala and Qhuzulini Sithole, the leader of African Cultural Heritage Trust, during the press conference on the current scourge of violence against women, children and residents from other African States in Braamfontein on 17 September 2019.
Image: ANTONIO MUCHAVE / SOWETAN

The leaders met on Tuesday morning at Samro House in Braamfontein, calling on the African cultural revival.Local music legend and producer Sello “Chicco” Twala emphasised that South Africans were not xenophobic.

Twala said what has been happening in the country was fuelled by criminal influence.

“We all know that the fight between locals and other Africans has been happening for a while, but I still do not believe that we are a xenophobic country. I say so because we live with all Africans in our townships.”

“As artists, we are very concerned about these fights. What we have seen happening in the past weeks had an element of thuggish which has made us look bad to the world. We will find a solution to this, we love our African brothers.”

President of ACHT, Qhuzulini Sithole echoed Twala’s statement saying: “We are not xenophobic; foreigners owned spazas in our townships. We are concerned as advocates of the culture because we go around the continent working with different people.”

Highlighting the violence directed at women and children, Sithole said: “In our culture, we respect women and their role. The killing of kids in African culture is a taboo. The problem of violence against women and children has made people to believe that men are the same. There are men who still have morals and respect both men and women.”

Sithole further explained that ACHT was planning to host workshops and dialogues in different communities to address the problem of violence. He called on kings, queens and traditional chiefs to support the initiative.

International relations and cooperation minister Naledi Pandor has blamed the local media for deliberately pushing a narrative that paints the ...
News
2 years ago
Next Article