Men don't need to be touchy, trash tag is against the ills of patriarchy 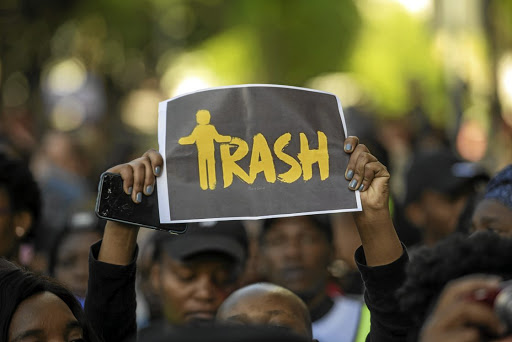 A protester during the march against gender-based violence in Sandton last week raises her feelings about men through her placard. / Gallo Images/ Alet Pretorius

The country has its attention set on issues around gender-based violence, attention that is necessary and long overdue. During this period, a lot of dialogue has been taking place around the plight of women and children in South Africa, on social media, television and print media.

During these conversations, I have realised how quickly men push back against #MenAreTrash or how defensive men become when they are shown to be the main cause of the violence against women and children.

Men are trash refers to the broader structural problems that are a manifestation of patriarchy, inequality, and men being able to get away with crimes against women. You just read that and are probably thinking to yourself, "but I did not choose to be born a man".

That is the same excuse white people give when we talk issues around white privilege. The common mistake here is the failure to recognise the undue privilege that comes as a result of an entrenched structure.

When men are called trash, or when white people are called out on their privilege, we are pushing back against the structural problems, not the individual.

As a man, what puzzles me most about men's push-back against being labelled as trash, is that we as men are also scared of each other. Men do not feel entirely safe in our country, because of other men. Indeed, men's experience of violence is not comparable to that of women, however, we too fear each other.

Men constantly and actively warn girl children and women close to them, against men. Uncles, brothers and fathers, try as much as they can, for as long as they can, to ensure that the females in their lives do not date, go out or even befriend males because they too know that men pose a danger to women.

Gender-based violence (GBV) is a nightmare in SA, and the response by government is nothing other than more empty promises of action.
Opinion
2 years ago

Men, here is this privilege we were born with. Instead of being defensive when called out, let us think of smaller actions we can take to dismantle and undo the drawbacks that patriarchy comes with.

This is important for us to do because women are not the only ones who stand to benefit from the demise of patriarchy. We too as men stand to benefit. Patriarchy is detrimental to us too; it is burdensome.

Here are the small steps we can take; call out men around you on their misogynistic jokes, isolate the men who are known abusers, do not be complicit when injustice happens against women, in the workplace and in casual spaces, treat your sons equally to your daughters and raise boy children who do not think domestic work is for women.

If all of these smaller tasks seem tedious for you, imagine what it is like to be a woman.

All you have to do is keep yourself and fellow men around you in check when it comes to their displays and perpetuation of toxic masculinity and patriarchy.

Well, for women, the task is even bigger. Women have to attend self-defence classes, have to walk around with pepper spray, have to limit their movements, they can't comfortably walk or live alone, have to fight being paid less than a man for the equal amount of work, have to work hard at ensuring that they are not undermined solely because they are a woman.

Let men think of how we can do better to undo the ills of patriarchy, which would benefit society as a whole.

As I watched the #sandtonshutdown protest against gender based-violence this past Friday, what stood out for me was hearing a specific repeated plea, ...
Opinion
2 years ago

Gender-based violence (GBV) is a nightmare in SA, and the response by government is nothing other than more empty promises of action.
Opinion
2 years ago

Even President Cyril Ramaphosa's most enthusiastic adherents admit that his first 100 days in office in the current term were not that impressive.
Opinion
2 years ago
Next Article