Wanted: political entrepreneurs to forge a common nationhood in SA 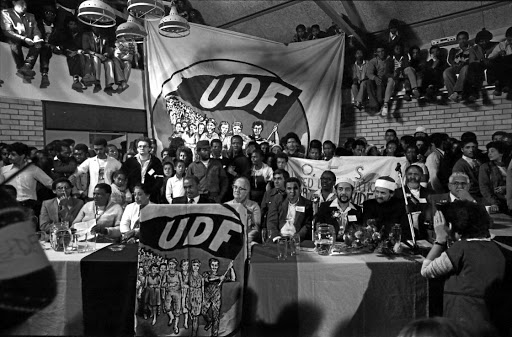 The sense of nationhood across ethnic and racial lines - as epitomised in the Struggle heyday which saw the birth of the United Democratic Front in August 1983 - has not quite been replicated in a democratic SA. /RASHID LOMBARD

My personal highlight of Heritage Month 2019 was not me donning one of my favourite dashikis or Madiba shirts; or enjoying a convivial braai; or watching a beautiful fusion of classical Indian and Zulu-warrior dancing.

Instead, it was an event held at the Phoenix Community Centre in Durban, paying a touching homage to the various community organisers and activists who had set the foundations for the centre, which was celebrating its 30-year history.

According to the Group Areas Act, Phoenix was originally designated an Indian area. Like the Greek mythical bird it was named after, Phoenix has seen cyclical regeneration, today representing a thriving non-racial community with an active civil society.

Many activists present recalled how in the 1970s their milk teeth of political activism were cut on house visits in Phoenix. They engaged with residents in the suburb who were mobilised against rental hikes, against apartheid state structures, to the Release Mandela Campaign, to the Natal Indian Congress, to open identification with the United Democratic Front (UDF) and, later, the ANC.

Bannings, detentions and flights into exile were recalled alongside assassinations of such leaders as Victoria and Griffiths Mxenge.

In drawing upon that history, speakers, including guest of honour minister Pravin Gordhan, called upon the activists of today to revive the relentless spirt of civil society of the 1980s, the selfless ethics of the activists of the ages and the commitment to non-racialism.

It is common cause that the post-1994 period was characterised by "demobilisation" of organs of civil society. There was a sense then that SA was rid of apartheid and therefore could depend on the democratic state to deliver.

The leaders of Phoenix were quick to point that they did not succumb to such temptation, and how community resources were mobilised at the turn of democracy to complement limited state assistance so that social services could be rendered.

The 1994 period of building a democratic state saw a number of civil society activists joining the ranks of the bureaucracy or becoming career politicians or following lucrative livelihoods professionally or in business.

There was another level at which civil society demobilisation occurred: the high-handed manner in which government responded to their critiques of the democratic government made them wary.

No less personage than Archbishop Tutu had his wrists slapped when he dared to say: "An unthinking, uncritical, kowtowing party line-toeing is fatal to a vibrant democracy. I am concerned to see how many have so easily been seemingly cowed and apparently intimidated to comply."

Celebrating his 60th birthday, Johannesburg mayor Herman Mashaba took to social media on Monday to share a picture of himself during his early ...
News
2 years ago

Almost 15 years ago, leading academics Jo Beall, Stephen Gelb and Shireen Hassim argued that after 10 years of non-racial democracy the situation in SA could be characterised as one of "fragile stability".

On one hand, we have a non-racial democratic political regime firmly established which faces no imminent threat, and the state is accepted as the legitimate authority. On the other hand, apartheid's legacy, together with issues around the political transition, means that the new regime has not yet been effectively embedded in a non-racial and democratic social order.

They argued that "existing social fractures - faultlines - have been maintained or deepened, and new fractures created, as the emerging state has struggled to impose itself on the populace".

In the maelstrom of 2019, this remains a prescient observation. Despite more than 25 years of a "new SA" being proclaimed, the structures of privilege for the few and denial for the majority remain largely intact. Several "radical" policy initiatives have not been able to undo these societal divides.

Ongoing and endemic corruption, which continues into President Cyril Ramaphosa's reign, and the easy resort to politically motivated violence, challenge the power of the state. This can be seen in the limited impact the government has had on achieving economic growth.

Makhura has made huge strides as Gauteng premier

The premier wants to reverse de-industrialisation in Gauteng so that labour-intensive jobs can be created and for his province to take leadership in ...
Opinion
3 years ago

The inability of the various arms of state, including the prosecutorial authorities as well as the legislature, to hold the executive accountable, strengthens that argument.

This reality leads to suggestions that SA is en route to becoming a neo-patrimonial state where power and resources are controlled by a few.

The major stumbling block to that trajectory has been the power of the Constitution, the continued independence of the judiciary and the prowess of civil society.

Civil society, having lost some of its verve and vigour in the immediate aftermath of the 1994 elections, has regained its agency, making full use of the provisions contained in the Constitution to re-emerged as a formidable voice.

Steven Robins and Bettina von Lieres cite the Treatment Action Campaign (TAC) as an example of the new NGOs since the 1990s: "TAC's interventions promoted growth in its grassroots support base, helping turn it into a multiclass and multiracial social movement.

"In addition to occupying new legal spaces, TAC engaged in widely publicised acts of 'civil disobedience', which played a central role in providing new visibility and innovative forms of organisation".

However, the spectre of violence looms large over this arena of society. Widespread as this may be, destructive as it could be, it does not constitute yet a threat to sovereignty.

Though, if a political formation which is able to "connect these dots" does emerge, it is quite possible that the state's authority could be fundamentally challenged.

The increasing number of protests is testimony to the scale of inequality and economic mismanagement, impacting on the legitimacy of the state and the level of trust among the population as the state does not adequately undertake its core tasks of providing services.

Nationalism should be looked upon as the glue which holds sovereignty and national identity together.

The power of this ideological construct where a sense of what the nation is - presented compellingly by a well-organised group of "political entrepreneurs" - can shape self-identity as well as how citizenship and the state are constructed.

Be it "ethnic-based" such as Arab nationalism or Hindu chauvinism, or the more "civic" variety such as Indian secular nationalism, it provides the centre without which things can fall apart.

The Indlulamithi 2030 Scenarios project, led by think tank Mapungubwe Institute, points to the absence of a compelling articulation of a vision for South Africa which can help all citizens transcend their differences.

Additionally, there are no clear "political entrepreneurs" today who can articulate this nationalist vision.

This does not mean that the centre will not hold - South African citizens will go on being part of the nation state. It's just that in this context, when the "larger ethnicity" of a united SA experienced in the 1990s is not being reaffirmed, the tendency to fissure into ethnic laagers grows.

There is space for civil society leaders to step into the breach and play that role of nation-builders on the back of culture of non-racialism and democracy.

The ANC has heaped praise on Bosasa CEO Gavin Watson, describing him as an anti-apartheid activist and philanthropist who fought in the struggle for ...
News
2 years ago

Struggle veteran Amos Ndwalane, who escaped the noose by a mere seven days due to the unbanning of the ANC in 1990, has died — just two months after ...
News
2 years ago

The ANC has gone on the offensive, and launched an attack on the Sunday Times and City Press newspapers for publishing details of how ANC secretary ...
News
2 years ago
Next Article