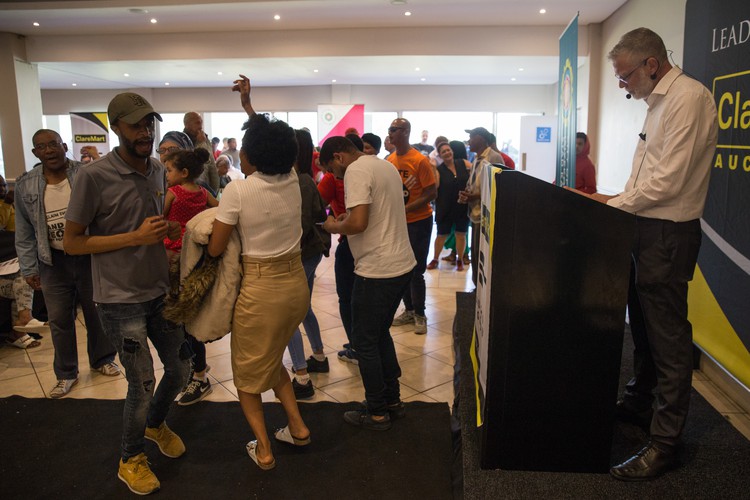 Reclaim The City activists on Tuesday disrupted the auction of a house in Woodstock, Cape Town, from which a family was evicted.
Image: Ashraf Hendricks / GroundUp

Housing and community activists disrupted a property auction in Mouille Point, Cape Town, on Tuesday to protest against the eviction of 80-year-old Kenneth Blaine and his family.

The protesters and the Blaine family claim that they were given no prior notice of their eviction and no alternative housing for the night, forcing them to sleep on the street.

GroundUp has previously reported on the family's plight.

After the first property on the list was sold, more than a dozen activists interrupted the auction with singing and chants of “No auction!” The protesters argued with auctioneer Andrew Koch for more than an hour before the event was officially cancelled.

Koch is the executive director of Claremart, which has a contract with the City of Cape Town to sell its properties.

Activist organisation NU has launched litigation in the Cape High Court to compel the City of Cape Town to develop a housing policy that would ...
News
2 years ago

“Evictions that lead to homelessness are illegal and unconstitutional,” said Nkosikhona Swaartbooi, a member of housing activist group Reclaim The City. “Where was the alternative housing for this man and his family?”

GroundUp received word on Tuesday from the City of Cape Town’s media liaison office that the city was investigating the eviction.

Koch announced just before the auction began that the Plein Street property had been illegally occupied and that all legal processes had been followed to accommodate the residents.

“The council jumped through all the necessary hoops and gave the people more than adequate time,” said Koch.

Reclaim the City activists on Wednesday staged a protest at the Green Point Bowling Green in Cape Town in a demand for the property to be used for ...
News
2 years ago

Kenneth Blaine and his son Alain remained outside the house in Woodstock during the auction. When questioned about the auctioneer’s comments, they reaffirmed their claim that they had been given no options for alternative housing - and no warning of eviction.

“We had nowhere to go,” said Joanne Blaine, Alain’s wife. “They didn’t tell us anything.”

However, after the auction was disrupted, GroundUp spoke to a member of Reclaim The City, who said the family had come to one of the organisation’s meetings more than a week before the eviction took place to ask for the group’s assistance.

“That is how we knew to come yesterday,” he said.

Nevertheless, he added: “I don’t think they knew what was going to happen.”

Members of other organisations were at the auction, protesting against the sale of different properties, including a community garden in Bonteheuwel and a disputed lot in Steenberg.

The month of August marks exactly 34 years of a painful episode in the history of the ANC in the Border region when 19 lives were brutally killed ...
Opinion
2 years ago

The call to take care of our environment is arguably at its height.
Good Life
2 years ago
Next Article