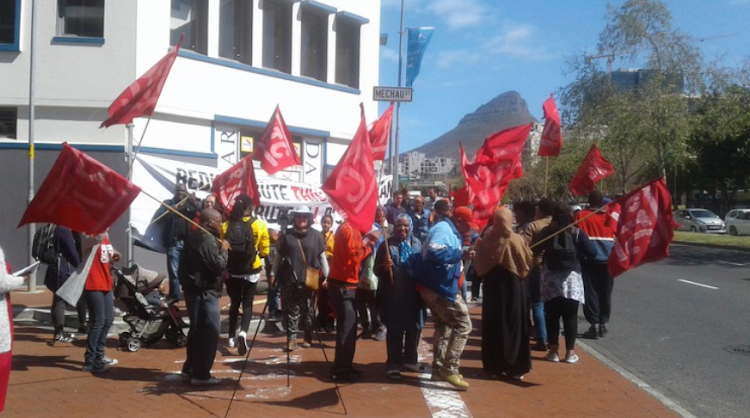 Activist organisation and law centre Ndifuna Ukwazi (NU) has launched litigation in the Cape High Court to compel the City of Cape Town to develop a housing policy that would require new developments to include affordable housing.

To launch the litigation about 30 NU and Reclaim the City members picketed outside a proposed new apartment development “The Vogue” on 7 Buitengracht street in the city centre.

According to NU attorney Jonty Cogger, the city approved the development but it does not include affordable housing units in its building plans. Cogger says it is just one example of numerous building developments the city has allowed though most Capetonians cannot afford to live in them.

“Ndifuna Ukwazi over the last two years has objected to about 50 development applications, and has argued that when the city approves private developments It has an obligation to transform the spatial apartheid by asking developers to include affordable housing in their developments,” said Cogger, adding that only 10% of Capetonians could afford to live in an inner-city building like The Vogue.

A Cape Town landlord with almost 3,400 homes on its books says it is being targeted by would-be building hijackers.
News
2 years ago

“We have conclusive evidence to show that even just the average residential unit, excludes 90% of Capetonians. That makes this development spatially unjust because it excludes historically marginalised people. It does not do anything to transform the apartheid-era city.”

Peter Adams, a 59 year-old Reclaim the City member, believes that developers exploit poor people. “We do the dirty work, and they don’t want to give nothing back to the community,” he said.

The Vogue is a project by property developer FWJK.

According to FWJK CEO Dave Williams-Jones, inclusionary housing could not be incorporated into the 39-story development as it would be too expensive. “Affordable housing from a cost perspective is more appropriate in a four-storey walk up with on grade parking,” said Williams-Jones.

He also sent GroundUp a press statement on behalf of FWJK in which the company said that NU’s action was blocking employment opportunities.

The deputy mayor of Cape Town refused to meet housing activists who occupied a Cape Town golf course on Thursday.
News
2 years ago

“Ndifuna Nkwazi has yet again put thousands of jobs at risk in their latest attempt to stall the development of a new R1.4bn mixed use development by FWJK Developments in the Cape Town CBD which was planned for construction commencement in the first quarter of 2020. In bringing their High Court action against the City and FWJK, they have potentially halted the construction of this project by up to three years,” the statement read.

In response Cogger saw the employment argument as a distraction from the real issue of exclusionary housing.

“Developers use the threat of immediate jobs (often without evidence) to deflect from the fact that the approval of exclusive developments has far worse long-term threats to the sustainability of Cape Town, he said. “Where do the construction workers live, and could they realistically ever afford to live in the city?”

Williams-Jones also said that the high price of buying land has made it less cost-effective for property developers to include low-cost housing in their structures.

“The introduction of affordable housing into a high-rise development negatively affects the viability of the project and it is just not possible to develop on this basis.”

Cogger said NU is not against the development of Cape Town, but wants structures that promote a spatially just, equal and inclusive city.

Williams-Jones felt that affordable housing was a public sector issue that was being unfairly placed on the private sector.

This article will be updated on Monday with comment from the city.

— Shoba is a Daily Maverick intern who has been seconded to GroundUp for a month.

— This article was originally published by GroundUp.

For only R1,016 a year an exclusive sports club within walking distance of Cape Town’s CBD has sole access to land larger than four rugby fields.
News
3 years ago

The Western Cape High Court has interdicted housing activist movement Reclaim the City (RTC) from hosting an event at Woodstock Hospital on Sunday. ...
News
3 years ago
Next Article