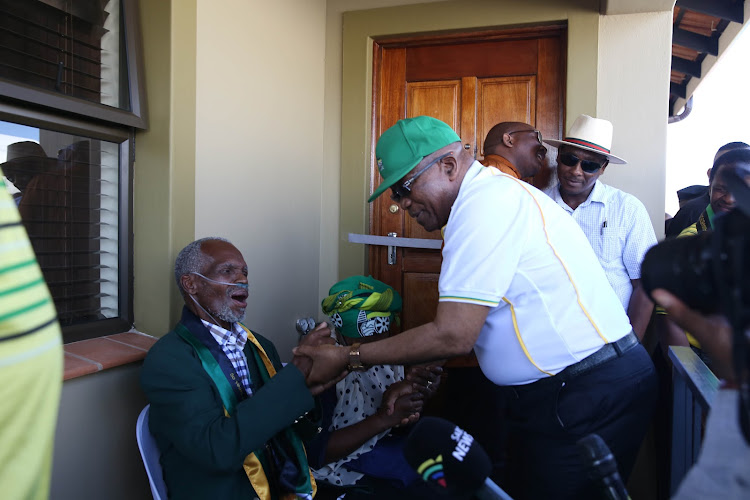 Former president Jacob Zuma greets struggle veteran Amos Ndwalane during the handing over of his new house in Lamontville in Durban in May.
Image: Thuli Dlamini

Struggle veteran Amos Ndwalane, who escaped the noose by a mere seven days due to the unbanning of the ANC in 1990, has died — just two months after getting a house from former president Jacob Zuma.

Ndwalane was allowed out of his hospital bed for two hours on May 3 so that Zuma could hand over a new house to him in Lamontville, Durban.

The ANC Veteran’s League in KZN announced on Friday that Ndwalane had died at the weekend following a long illness.

The league’s secretary, Teresa Mthembu, said Ndwalane was part of the coterie of ANC members who never backed down during “the difficult days when many freedom fighters were murdered, forced to exile and arrested”.

In May, Zuma handed over a house to Ndwalane, which was built by Durban company Enza Construction. This was after the company was approached by former KwaZulu-Natal health MEC Sibongiseni Dhlomo, who had been asked by Zuma to help struggle veterans who were struggling to make ends meet.

Struggle veteran Amos Ndwalane, who escaped the noose by a mere seven days due to the unbanning of the ANC in 1990, was allowed out of his hospital ...
News
3 years ago

Before the three-bedroom house was built, Ndwalane and his family lived in an old house with roof that leaked. After Dhlomo heard about his plight, he secured a donor to build him a decent house. His old house was also completely renovated.

Ndwalane, 70, was hospitalised after suffering from a lung problem. He was transported to his new home in an ambulance from City Hospital in Durban, and paramedics kept a close watch on him throughout the proceedings.

The MK veteran was due to be hanged after spending eight years in the Pretoria Central Prison (renamed Kgosi Mampuru II in 2013). He was the leader of a mission that led to the death of the person who assassinated Lamontville-based activist and anti-poverty campaigner Msizi Dube on April 25 1983.

He was saved by the unbanning of the ANC in 1990, just seven days before he was scheduled to be hanged.

During his previous visit to Pretoria Central Prison, Ndwalane reduced everybody to tears when he recounted the names of comrades who were hanged while he was on death row.

He also spoke about the pain of being away from his family and the excruciating anxiety that came with the prospect of walking up the 52-step stairway to the gallows - and his ultimate relief at the unbanning of the ANC, which saved him from the noose.

He was a professional boxer between 1968 and 1973. Mthembu said Ndwalane's political consciousness was deepened in 1976 when he witnessed the massacre of school children by the apartheid regime for standing against to use of the Afrikaans as medium of instruction in schools.

“He was recruited to the United Democratic Front by the late comrade Harrison 'Msizi' Dube and later worked as his bodyguard,” she said.

In the UDF he worked with the likes of the late struggle stalwarts Archie Gumede, Shadrack Maphumulo and many others, some of whom died in exile.

“The Veteran’s League has lost one of its dedicated freedom fighters. We have lost a disciplined veteran and a true revolutionary, who sacrificed his youth and risked his life for the liberation of SA,” said Mthembu.