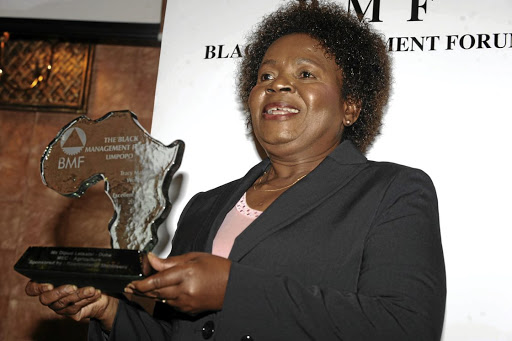 Former Limpopo MEC for agriculture and rural development Joyce Mashamba, who died in June last year, was remembered during a ceremony at her village in Mulamula, Limpopo./Elija Mushiana

Last Saturday a meeting to commemorate the first anniversary of the passing of former Limpopo MEC for agriculture and rural development, Joyce Mashamba, took place at Mulamula, her home village.

She was one of the country's heroines who, in a quiet but effective way, contributed much to the freedom struggle.

Her death from a long illness on June 20 last year was a painful reminder of the slow phasing out of a breed of South Africans to whom human beings meant more than just flesh and body mass.

So, Saturday's commemorative event was as sad as it was joyous. It took some of us down memory lane, recalling the dangerous and idealistic days of the 1970s and '80s and early '90s when, together with her, we dared the apartheid regime as young and determined activists, risking everything including our lives.

Like the Argentinian revolutionary, Che Guevara, Mashamba was driven by indignation at injustice. She did not have to know the victims personally for her to act, as she did, to challenge injustice. She had been brought up by a community which believed that: "Munhu i munhu hi vanwani vanhu" - a person is a person because of other people.

Once a common attribute of pre-colonial African society, this outlook, coupled with her political and academic exposure, drew Mashamba towards the ANC and the SACP and the party's Marxist ideology to which she subscribed.

But it was the political events leading to the independence of Mozambique on June 25, 1975 which would have a lasting impact in her life.

Sometime during 1974 she and her husband, George Mashamba, then a philosophy lecturer at the University of the North, locked up their residence in Polokwane and headed for Mozambique after learning that the independent African state would require English teachers. Or so they thought.

They went via Eswatini where they met ANC operatives Thabo Mbeki, Jacob Zuma, Stanley Mabizela and others. After a night-long paraffin lamp-lit meeting with the ANC, the couple was persuaded to return home as underground operatives. They agreed, thus, putting an end to the plan to teach English in Mozambique.

Back home, they soon came under the radar of the apartheid regime, determined as it was to imprison, exile and even kill its opponents.

Together with S'bu Ndebele and Percy Tshabalala, the couple was arrested and charged for "furthering the aims and objectives of the banned ANC" in 1976.

Mashamba was accused number three in a trial that lasted four months from October 1976 to February 1977. She would have been released were it not for the recalcitrance of state prosecutor Von Lieres - who later defended apartheid defence minister Magnus Malan in his 1996 trial for
the massacre of 13 KwaMakhutha residents in January 1987. Also, during the trial adjournment at the end of 1976, police investigators discovered that she occasionally drove ANC recruits into Eswatini.

Though the couple had been ANC underground operatives since their 1974 Eswatini encounter with the organisation, George did not know of this part of his wife's activities until the state ventilated it during the trial.

"When I asked her about it," said George this week, "she simply asked: 'don't you know the [secrecy] rules of our organisation?' That was it. I never pursued the matter further."

Mashamba exuded qualities that were the hallmark of all good ANC cadres throughout its years of illegality.

At the end of the trial she was sentenced to five years imprisonment. Her aunt broke down in court, shouting out the question, what would become of Mashamba's three young children, then aged five, three and one? Mashamba retorted that the aunt would look after them, raised a clenched fist and shouted "amandla," before being led down to the holding cells.

Many years later, Joe Slovo would express a similar sentiment in his memoirs, The Unfinished Biography. He wrote: "the world would be poorer place if it was peopled by children whose parents risked nothing in the cause of social justice for fear of personal loss".

"If I regret anything, it is . that we might have found a way of easing the hidden traumas [the children] were suffering."

Mashamba was imprisoned at Kroonstad Female Prison in Free State, while Ndebele - the first accused and her husband - accused number two - were sentenced 10 years on Robben Island, though they were transferred to Johannesburg Prison five years later. Tshabalala, the fourth accused, was acquitted.

In Kroonstad, Mashamba served her prison sentence alongside Struggle heroines such as Esther Maleka,
Dorothy Nyembe, Elizabeth Nhlapo, Lilian Keagile and Thandi Modise, among others.

Those of us who became politicised after the events of June 1976 came to know Mashamba after her release from Kroonstad in 1982. We found her a place to stay with fellow comrades, mother and daughter, Vesta Smith and Cecilia Palmer - both deceased - in a small house to which was attached a barbershop at the corner of Hamilton and Beavan Avenue in Newclare, Johannesburg.

No sooner had she settled than the house become a safe house for activists from Limpopo, who were on the run.

She worked for the Dependants Conference, a project of the South African Council of Churches formed in 1963 to support political prisoners and their families.

She continued her underground activities, working closely with leaders such as the late Albertina Sisulu.

She would be rearrested under the state of emergency in 1986, a year before George was released.

After 1994, Mashamba became a national and provincial public representative, roles she fulfilled with dedication.

There is tons more to say about Joyce Mashamba. Suffice it to say, her life provides wide-ranging lessons. Uppermost is loyalty to principle. Humility and commitment to service to the people is another.

More pressing, especially in these times, is treating public office as a mandate and not personal property. Equally crucial is the pursuit of life-long learning.

Mashile-Nkosi is executive chairperson of Kalagadi Manganese, a mining company based in Johannesburg