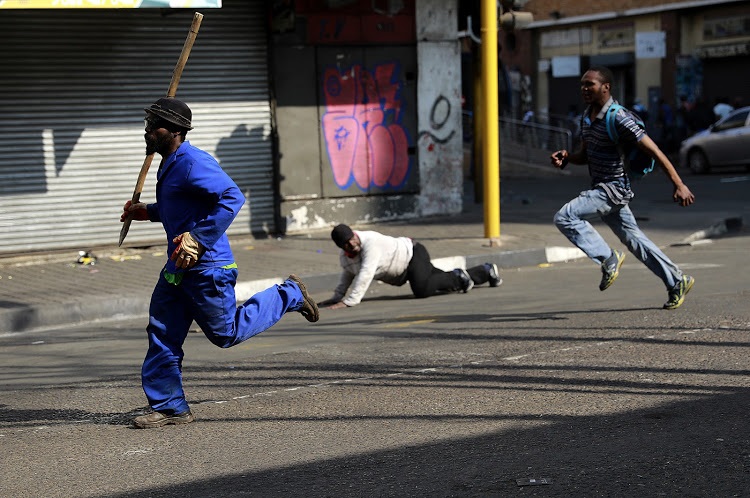 Police stepped up the pressure and continued with raids, confiscating goods from alleged illegal traders on August 7 2019.
Image: ALON SKUY

It was a massive show of force, and an attempt at regaining public confidence by the police as they cracked down on counterfeit goods syndicates and other criminal activity in downtown Johannesburg yesterday.

The police action came a week after a group of cops were violently driven out of an area in the city centre by mostly foreign-born traders as they attempted to raid the area.

The incident caused much anger for the public and embarrassment for law enforcement agencies as it suggested they had lost control at least in that part of the city.

It also rekindled the old debate about crime and the involvement of foreign nationals in Johannesburg and other urban areas.

Gauteng premier David Makhura has confirmed that at least 600 people were taken in by police on Wednesday to verify whether they are in the country ...
News
3 years ago

While we welcome the police action in the city centre as it may go a long way in restoring the respect for the law and a reduction in crime in the CBD, we wish to caution authorities against utterances and actions that suggest that only foreigners are being targeted.

Crime is indeed a major problem in this country, and most of it is committed by locals. In rooting out criminal activities, the authorities must never act as if foreign nationals are the main problem. They need to deal with criminal conduct holistically, rooting it out where it rears its ugly head - whether perpetrated by locals or foreign nationals.

Yesterday's action was concentrated on breaking the back of the counterfeit goods syndicate, and justifiably so.

Lawless bandits must pay for their actions.
Lifestyle
3 years ago

The production and sale of fake and counterfeit goods impacts negatively on the economy as those involved mostly do not pay taxes.

They push out genuine businesses who are not only paying taxes, but also employ thousands of South African workers. It is for this reason that a crackdown on contraband is an imperative.

But, in carrying this out, government leaders and others in authority should guard against a language that seeks to portray foreign nationals as being primarily responsible for lawlessness.

Such is not just plainly false, but fosters dangerous xenophobic attitudes that could lead to violent vigilantism. A crackdown on crime is possible without criminalising every foreign born trader working in the CBD.

Build shacks in other countries

Millions of South Africans without jobs must cross the borders and go and build shacks, put up tables in the streets of cities and towns in other ...
Opinion
3 years ago

Businesses are 'unfairly targeted'
News
3 years ago
Next Article