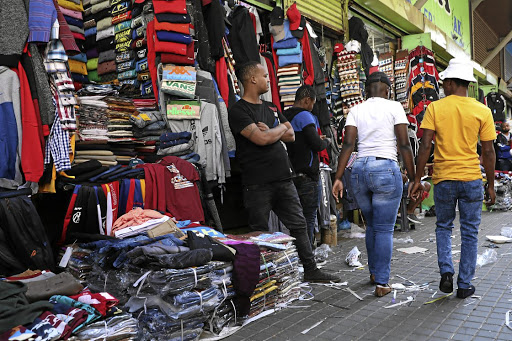 Traders who conduct their business along the busy Jeppe Street in the Johannesburg CBD claim that they have been unfairly targeted by unscrupulous police officers who assault women. / Thulani Mbele

About 20 minutes before police clashed with informal traders in the Johannesburg inner city last week, a group of 10 men in plain clothes and carrying assault rifles raided a building on Jeppe Street.

Provincial police spokesperson Brigadier Mathapelo Peters said officers had to tactically withdraw from the intelligence-driven operation targeting counterfeit goods in the inner city to avoid being forced to use live ammunition.

But informal traders have told Sowetan there are people targeting foreigners during the raids. They said the raids were led by someone they had seen before.

"He did not come with any search and seizure warrant as required by law.

"If he is really a brand representative, he should not be the one doing the raid but the police," said trader Tadesse Yemane.

A riot broke out in Jo’burg CBD when police confiscated counterfeit goods from street vendors. Officers fired rubber bullets in an attempt to disperse the crowd. In retaliation, protestors pelted officers with bricks and bottles. Provincial police say officers ‘tactically withdrew’ from the operation to avoid being forced to use live ammunition.

He said the group constantly targeted one building and also assaulted women during the raids.

Yemane said informal traders were not against the police doing their job. "We want those raids conducted so that we can have a peaceful environment," he said. "This place services people from as far as Malawi, who come here to find a cheaper price.

"We wish police could deploy a mobile station here. We cannot afford to have distrust with the police. At the end of the day, it is only the police we can run to," said Yemane.

Peters said she was aware of allegations and they could not be taken lightly.

"I know these allegations and they have doing the rounds. but in as far as cases opened, they have not come with case numbers... They should then allow for the cases to be investigated. It is very serious allegations that they are making," said Peters.

Johannesburg mayor Herman Mashaba blamed the chaos in the inner city on the national government. He described the situation in the CBD as a "time bomb".

"We are being let down very badly by home affairs, which is creating this mess," said Mashaba at the scene of a skirmish between police and vendors on Friday.

"In the under three years I have been in office, I am now dealing with the fifth minister of home affairs. I have brought this matter up in December to say Joburg is sitting on a time bomb in terms of undocumented people."

The street battle between police and enraged street vendors in the Johannesburg CBD could have ended in a "bloodbath", police said on Friday.
News
2 years ago

Law enforcement officials were attacked during a violent protest in the Johannesburg CBD on Thursday afternoon.
News
2 years ago
Next Article