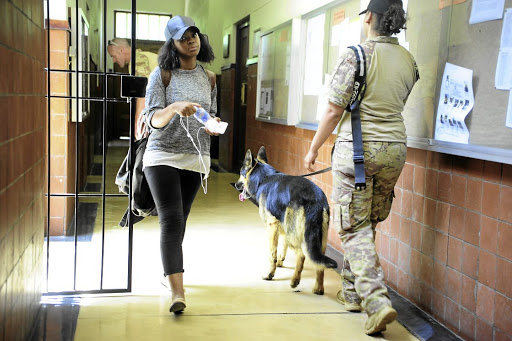 A student walks past a private security company guard and sniffer dogs checking for explosives in the corridors of Wits University. Safety of students needs to be a priority, the writer feels.
Image: Thulani Mbele

The academic year has begun for students across SA in universities, colleges and technical and vocational education and training (TVET) colleges and, of course, it has not been without demonstrations and unhappiness over the usual - registration fees, adequate accommodation and so on.

However, little is said about students' safety on campus. For instance, a student was shot and killed recently, allegedly at the hands of campus security and as rates of sexual violence continue to increase, students are exposed to significant risk.

But the department of higher education continues to be mum on students' safety on campus and this is concerning as research shows that a hostile environment affects a student's ability to participate in or benefit from an educational institution.

Sadly, unless students are able to pursue their educational rights in an environment that is both safe and secure, the opportunity to pursue an education remains meaningless.

Safety on campus remains elusive. This is despite the constitution providing everyone the right to be free from all forms of violence from either public or private sources. The implication of this for all institutions of higher learning is that they are bound to ensure a violence-free environment for their students. This includes freedom from sexual violence, in an environment that is not harmful to their health or wellbeing and to have the environment protected, for the benefit of present and future generations, through reasonable legislative and other measures. However, the department continues to fail students, having no legislative provisions in place that safeguard students from all forms of violence.

The current number of students enrolled in higher education institutions is expected to increase to approximately 1.6-million in universities, 2.5-million in TVET colleges and one million in community colleges by 2030. According to the department, its highest priority is to strengthen and expand the public TVET colleges.

This restructuring, coupled with the expected upsurge in enrolments by 2030, is laudable, but at the same time alarming.

It is alarming considering that no official data can be found on the prevalence of sexual harassment at tertiary institutions, for example, which I will discuss in brief.

Given the lack of legislative responsiveness to sexual violation in academia, academia becomes a playground for predators.

As mentioned previously, recent studies on sexual violations in institutions of higher learning indicate that female students are four times more at risk of sexual assault and recent research in South Africa indicates that students are by far the main victims of gender-based violence, according to Gillian Finchilescu and Jackie Dugard.

Thus, without law reform to ensure the disclosure of statistics and reporting mechanisms for victims, academia is at risk of becoming a sexual predator's haven.

Policy implementation that is self-regulatory is inherently flawed, because it ensures the perpetuation of a vicious cycle between the aim of abolishing sexual violence and the mechanisms to prevent it.

This, then, suggests that law reform is necessary.