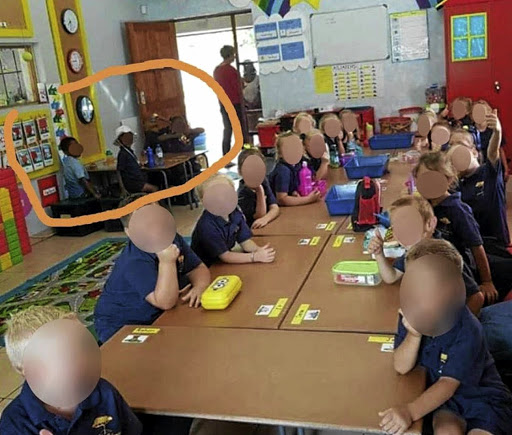 A picture of a grade R class at Laerskool Schweizer-Reneke in North West where black pupils were separated from their white classmates.

Shocking pictures that exposed brazen segregation of pupils based on the colour of their skin in a Schweizer-Reneke primary school reveal that the idea of rainbowism is only a dream.

Also, this type of segregation in so-called former model C schools is nothing new nor recent.

According to reports, the department of education in the Eastern Cape is investigating similar discrimination that has emerged at a school in Matatiele.

When racists don't separate pupils in class based on the colour of their skin, they make it difficult for black pupils to even learn in those schools by adopting racist language policies.

Remember unrest over Hoërskool Overvaal, which adopted Afrikaans as the sole medium of instruction, ensuring that scores of black pupils are successfully excluded because there aren't many black individuals who would want their children to learn in Afrikaans?

Besides, access to education in one's official language, such as Afrikaans, cannot be prioritised over and above the right to equitable access to learning by other racial groups.

In a similar matter, the Constitutional Court ruled that a university would not be able "to provide language of choice without indirectly discriminating on the basis of race".

The court found that this could potentially lead to racially segregated classrooms and confirmed that English will be the primary medium of instruction.

Fundamentally, discrimination at schools happens often and all over the country. Rouge school governing bodies (SGBs) are running schools and adopting policies that they believe benefit their children without thought or care.

When a school is predominantly attended by white pupils, their white parents swell SGBs and adopt discriminatory policies to the detriment of black pupils.

For instance, I heard that the primary school that I attended adopted Afrikaans as the primary medium of instruction and this came as a massive surprise, because I remember that the school functioned well as a double medium school.

Trade union Solidarity will on Tuesday announce the legal action to be taken to have the suspension of Schweizer-Reneke teacher Elana Barkhuizen ...
News
3 years ago

However, racists want the nation to believe the only reason why such schools adopt Afrikaans as a primary medium of instruction which is based on lack of capacity to accommodate both English and Afrikaans speaking pupils. This is a lie.

I also found that the school was not the only primary school to adopt such language policies.

All of the primary schools in surrounding suburbs adopted the same racist policy.

Racists have found strategic ways, in our democracy, to discriminate against, humiliate and oppress black people. This is unacceptable.

And the nation should be further appalled that right-wing trade union Solidarity has threatened to take legal action against the education department for allegedly suspending the wrong teacher in the Schweizer-Reyneke racist abomination before even condemning the racism depicted in the picture first.

Solidarity seems unconcerned about what the picture reveals and what that means for our country.

Political courage is required in order to address the insidious effects of segregation in public education once and for all.

It is important to note that the impact of discrimination, whether in the form of language segregation or another form, is just as detrimental to society as brazen racism that existed under apartheid.

But why is government napping and not protecting children who have the right to basic education and human dignity?