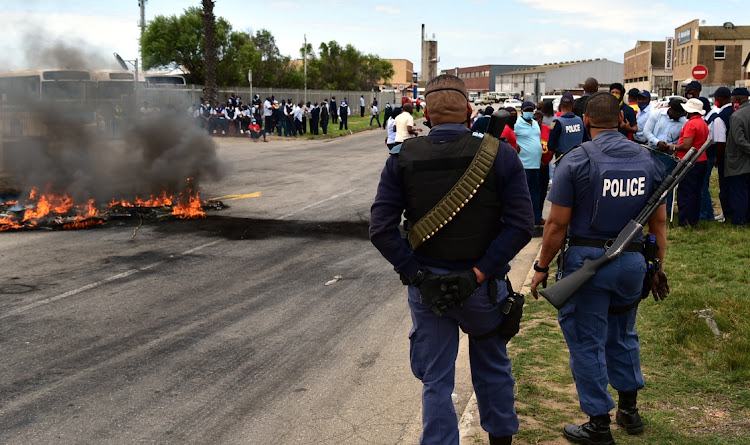 The police have pumped millions of rand into ensuring they respond to protests with the correct training and equipment. File photo.
Image: Eugene Coetzee

The SAPS has spent more than half a billion rand to better equip police officers responding to incidents of public disorder.

Police minister Bheki Cele said on Monday R598m had been spent on better resourcing and capacitating the public order police unit. Some of the money went towards two-way radios, loud hailers, video cameras and PA systems for better communication during operations. Some of the funds went towards training.

“A total of 6,324 officers have been trained through numerous courses and found competent in proper crowd management. Officers in this unit have also been trained on the use of specialised equipment within the public order policing environment, including the use of water cannons and stun grenades,” Cele added.

“New-generation water cannon driving workshops have also been conducted to further equip and empower officers. All POP [public order policing] officers are trained in first aid and each vehicle used for the unit's operations is equipped with first-aid kits, as per the expert panel’s recommendations,” he added.

National police commissioner Gen Khehla Sitole says the use of rubber bullets to disperse protesting crowds will not be stopped. However, changes ...
News
9 months ago

He was speaking in Pretoria after unveiling a 596-page report compiled by an expert panel tasked with recommending better crowd management.

The panel was appointed after the findings of the Farlam commission into the 2012 Marikana tragedy in which 44 people, including 34 mineworkers, died during strike-related unrest at the Lonmin platinum mine.

The miners were shot by the police.

The expert panel was chaired by the late judge David Sakelene Vusimuzi Ntshangase and included security experts, police union representatives and senior officials within the visible policing division of the police.

The aim of the panel was to analyse recommendations by the commission and work towards professionalisation of the SAPS, in line with the strategic imperatives of the National Development Plan.

The police have been criticised over the years for the apparent excessive use of force when responding to public unrest. Some of the incidents led to injuries and deaths of civilians. The police were criticised for their military-style approach to handling the protests.

But Cele said this was not the case.

“Regarding the demilitarisation of the SAPS, through its research studies, the civilian secretariat has established that the visible policing units of the SAPS are not militarised,” he said.

“There are sections within the SAPS that are paramilitary by virtue of the crimes they have to deal with. It is not unique to SA that the tactical response team (TRT), the national intervention unit (NIU) and the special task force use specialised techniques to deal with serious and violent crimes.

“Overall, the professionalisation of the SAPS is being realised through ongoing internal training courses.”

Cele said the police remained an employer of choice for many young people.

“The police recruitment process continues to attract professional graduates,” he said. “We are pleased that the SAPS is now employer of choice for graduates of law, criminology, forensics and other policing-related degrees. Attracting the best will bolster policing and better serve South Africans,” he added.

Cele said despite the criticisms, the police were doing well in their management of protests. He said the report by the panel of experts would be taken seriously and the police would tighten their systems to ensure that capable people were employed within the force.

“The bulk of the recommendations [by the panel and the Farlam commission which probed the Marikana shooting] are to be realised in the short to medium term as they are incorporated into the SAPS Amendment Bill,” said Cele.

Three of the four police officers accused of killing Mthokozisi Ntumba have previous  brushes with the law, including attempted murder and drunken ...
News
9 months ago

“This bill has gone through a round of public comments and these inputs are being finalised before tabling the bill in parliament. The bill gives the assurance that no automatic rifles may be used in crowd control management,” he added.

“It will also address matters of vetting and integrity testing for those employed under the SAPS Act, including municipal police. Those joining the service will also need to be subjected to processes that ensure the integrity of the organisation is maintained.

“The civilian secretariat for the police service will monitor the implementation of the recommendations and provide regular progress reports.”

The four public order police accused of killing Mthokozisi Ntumba were granted bail by the Johannesburg magistrates’ court on Friday.
News
9 months ago

While Cele said automatic rifles would not be used by officers responding to public order issues, police commissioner Gen Khehla Sitole said the use of rubber bullets, however, would remain.

Among the additions to the SOP would be the distance that the police should be when firing rubber bullets at a subject. The olice have been criticised for their use of rubber bullets when responding to protests.

In one of the most recent incidents, a man died after he was allegedly shot by the police firing rubber bullets during a student protest in Braamfontein, Johannesburg. The victim, Mthokozisi Ntumba, was leaving a doctor's rooms when he was shot.