'There were about 20 police vehicles': Gabola church leader in lockdown bust 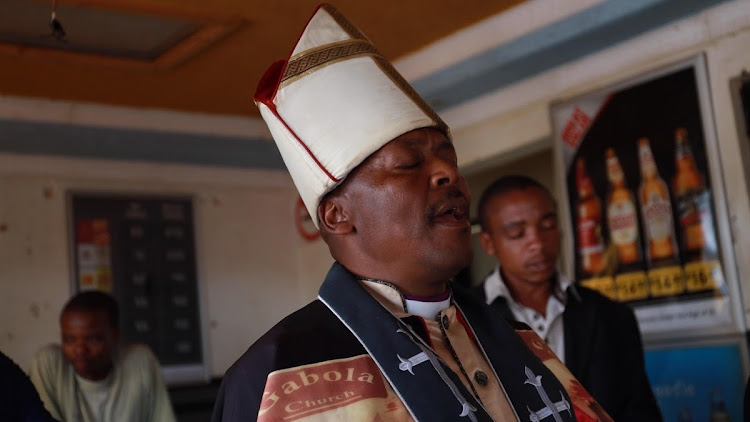 Gabola church leader Pope Tsietsi Makiti, his wife and congregants have been arrested and fined for breaking the lockdown regulations in Gauteng.

Police said the 55-year-old pastor was arrested with his 53-year-old wife at their home in Evaton North, Sedibeng, for allegedly operating the church on Sunday.

“Both were charged ... Other people were also arrested at another house in Evaton North for failing to confine themselves at their place of residence,” said police spokesperson Brig Vish Naidoo.

A 43- year-old pastor told his congregants not be afraid of "lightning" when the police were arresting them for allegedly violating lockdown ...
News
2 years ago

“Members of  the public order policing unit were summoned to the scene and informed of church activity in progress. On arrival they found people making or shooting a video. All arrested suspects were charged and released with a fine,” said Naidoo.

Times Select reported in 2019 that the Gabola church — whose name means “to sip” or “to drink” — did not require members to pay tithes; nor does it charge for funeral services and wedding ceremonies.

Makiti denied they were conducting a church service at the time of the weekend bust.

“We had visitors from Germany who came to my house,” he told TimesLIVE on Tuesday. When the police came, he added, the visitors had left and they were “concluding a meeting”.

“The gathering was not illegal and they did not find anything illegal in my premises,” said Makiti.

Makiti charged that the people behind his arrest wanted to dent the image of his church.

“We did not do anything wrong. There were about 20 police vehicles that came to arrest us. They came in all types of vehicles. The sad thing is that when we call the police for crime-related incidents, they struggle to send one police van to the community, but they came in numbers to arrest the leader of Gabola church.”

Makiti said he and his wife were each released on R3,000 bail and the rest of the group R1,000 bail.

Makiti told Times Select previously that he started his “drinking church” to offer a home to those who were not in strong financial positions or needed to escape from the daily grind. His church survives on donations from businesses.

During his ceremonies, he lifts his hands towards tavern-goers and blesses them with the words: “Amstel! Hallelujah!”

“At Gabola tavern we drink, and we don’t hide from God that we are drinking,” he said.

“After the sermon we invite all new members to come forward and be baptised. You come with your beer, your water, your milk or tea and we baptise you with it.”

For many, religion is a deeply personal undertaking but for others, it's an opportunity to make some quick cash. With some of South Africa’s churches coming under the spotlight, we take a closer look at some of the country’s more unconventional churches and what brings people to them.