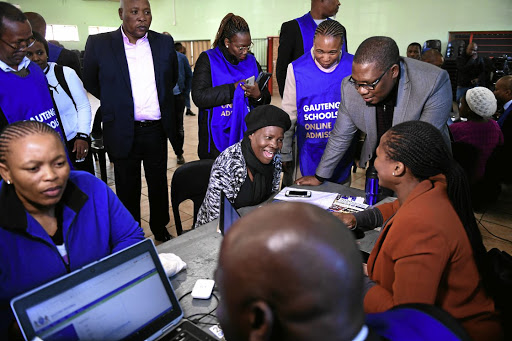 Education MEC Panyaza Lesufi claims there are people who are following his children. /Deaan Vivier/NETWERK 24

Gauteng education MEC Panyaza Lesufi yesterday revealed that his life was again under threat, saying he and his family were being followed around.

Briefing the media on the online registration at the department's offices in Johannesburg, an emotional Lesufi accused the Hawks of letting him down and failing to investigate the cases he has reported to them.

"I don't have a problem with people following me for the job that I am doing for the pupils of this province. I have received threats and I opened three cases with the Hawks but nothing has happened. Even when they brought an effigy of me, which they hanged outside the national education department's offices, the Hawks did nothing about that event," he said.

Lesufi said he was only worried about his family's safety as there were people who were following his children.

"There is no need for them to follow my family and I believe that after the Hawks failed to help me, I am all by myself. I am not going to resist to build a nonracial South Africa for our children. I am open, they can do as they wish but should leave my children alone," Lesufi said.

Hawks spokesperson Captain Ndivhuwo Mulamu said she could not comment on the matter as she was still waiting to get facts from the officers who were involved in the cases.

Over the past months, Lesufi has had a major fallout with lobby group AfriForum, which has started an online campaign demanding his removal.

Sowetan's sister publication TimesLIVE reported last week that AfriForum's campaign to remove Lesufi relates in part to what it termed as Lesufi's mismanagement of the online registration and placement procedure for grades 1 and 8 learners for the 2020 school year.

The organisation also accused Lesufi of constantly attacking schools that offered Afrikaans only as a medium of instruction. On the issue of Afrikaans, Lesufi said it was important to correct the distorted assertions made by some nonprogressive lobby groups.

"Such schools will be assisted to acquire the necessary educators that have qualifications and proficiency to teach in the desired LoLT," Lesufi said.

He reiterated that time was too precious to waste on negative organisations who do not have a desire for transformation, social cohesion and non-racialism.

"Such people aim to further oppress the downtrodden and to reduce the positive gains that were achieved since the dawn of our democracy," Lesufi said.

"This means that 96% of the pupils who applied on our online registration have been placed and we are left with 4%, which have to be placed before the month end of November. So far we have 3,210 grade 1 pupils who are yet to be placed and 6,408 grade 8 pupils. However, for now our priority is to work with grade 1 pupils as we don't want to stress them on their first experience of schooling," Lesufi said.