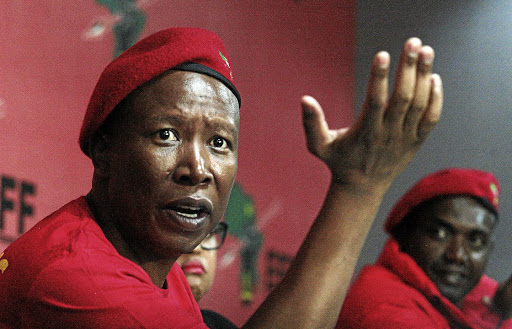 EFF leader Julius Malema says the VBS looting accusations are not new but a dirty campaign by detractors to link him to corruption to tarnish his image. / Veli Nhlapo
Image: Veli Nhlapo

The Sunday Times yesterday revealed that Malema used two trusts funds and an account belonging to an up-market Soweto restaurant to channel money from VBS Bank.

According to the report, funds from Santaclara Trading - which received deposits of over R4m from companies that looted VBS Bank - were immediately channelled to a trust named after Malema's child, Munzhedzi Family Trust, the Mazimbu Investment Trust and SUD restaurant accounts owned by his cousin Tsholo Malema.

These funds are said to have partly funded a plush R5,5m Sandown home as well his R3,3m Polokwane house through a VBS Bank bond applied for by his cousin Jimmy Matlebyane through Santaclara Trading.

The Sunday Times last month also reported that a R3,2m "fraudulent" home loan application to the defunct bank by a company owned by Matlebyane exposed how money from VBS flowed to the EFF or its leader.

The EFF student command (SC) has taken a swipe at party leader Julius Malema who suggested they were useless during a press conference on Thursday.
News
2 years ago

The report suggested that Matlebyane's application for the home was "amended" allegedly by a VBS Bank employee to reflect that he earned a monthly income of R155,000 instead of his initially listed R5,000.

The same company, Santaclara Trading, is reported to have received millions in deposits from Malema's lawyer, other companies doing work for the government, including LTE Consulting and allegedly the EFF itself.

Grand Azania was directly linked to Sgameka Projects which belongs to his brother Brian Shivambu that benefited R16m from VBS Bank.

However, Malema at the time denied any links to the VBS Bank loot, describing it as a "political war" waged against him and everyone close to him.

"It has been a desperation to link me and my family to VBS for two years now and there's nothing that bothers me about that," Malema told Sowetan.

"It's a political war against me and they can bring it. I'm not worried about any of that nonsense."